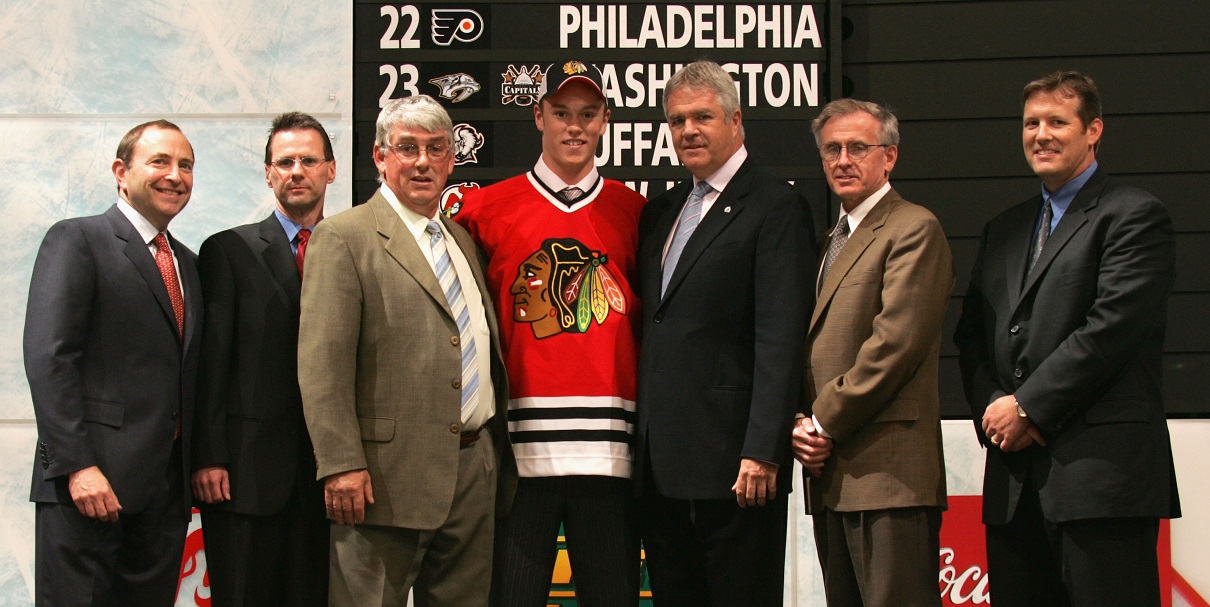 Earlier this week we celebrated the 15th anniversary of the Chicago Blackhawks selecting Patrick Kane with the first overall pick in the 2007 NHL Draft. The fact that it’s been 15 years since Dale Tallon called his name makes many fans — including me — feel really old all of a sudden.

Today, we’re staying with the historic appreciation thread and celebrating another draft anniversary. This time, it’s 16 years for Captain Serious.

Like a speech at the Oscars, we need to thank those who contributed to this moment being possible. Thank you Pittsburgh, who owned the second overall pick in 2006, and selected a different center — Jordan Staal. Had the Penguins picked Toews to ride with Sidney Crosby and Evgeni Malkin… good luck, NHL. Staal has enjoyed a terrific career, but we’re overwhelmingly thankful the Pens passed on Toews.

The first overall pick that season went to the Blackhawks’ rivals in St. Louis. They opted to take defenseman Erik Johnson, who is skating for the Colorado Avalanche in the Stanley Cup Final this year. If we’re glad Toews didn’t end up in Pittsburgh, we’re over-the-moon happy that Toews didn’t go to St. Louis.

Everything we wanted — more than we needed

Looking back at the 2006 NHL Draft class, Toews “sliding” to No. 3 overall was a huge win for the Blackhawks. And obviously his career has lived up to more than the hype that he brought with him.

In January of 2007, Toews etched his name in the history books with an iconic performance against the United States at the World Junior Championship.

(Yes, that’s No. 27 Patrick Kane getting denied at about 45 seconds into the video.)

That performance set the stage for Toews to do damage in Chicago, but he spent one year at North Dakota before joining Kaner with the Blackhawks.

On July 18, 2008 the Chicago Blackhawks named Toews the 34th captain in franchise history. He became the third-youngest player in NHL history to wear the “C” at 20 years, 79 days, trailing only Crosby in Pittsburgh and Tampa Bay Lightning center Vincent Lecavalier.

Toews has dealt with injuries during his NHL career, especially concussions, but he’s still one of only seven players from his draft class to appear in 1,000 regular season games in the NHL.

His 357 career regular season goals rank second from that year’s draft behind only Phil Kessel (who was reportedly the preferred pick of owner Bill Wirtz at the time).

In 2010, Toews won both a gold medal at the Olympics in Vancouver — where he was drafted — and the Stanley Cup (and Conn Smythe if we’re getting greedy with accolades). Adding those two accomplishments to his World Junior gold medal made Toews the youngest member of the IIHF Triple Gold Club, the most exclusive club in international hockey.

Toews is still the youngest player to ever win gold in the Olympics and World Junior and a Stanley Cup championship; he clinched the Cup at 22 years, 41 days.

The reason we took a few moments this week to appreciate the anniversaries of the Blackhawks drafting Kane and Toews is because we have reached a critical time in the history of the organization.

Toews and Kane have been the perfect odd couple to take the Blackhawks from afterthought to dynasty; the party boy with the curly hair from Buffalo and the stoic leader from Winnipeg. They came to Chicago together. They announced their second contracts together (with Duncan Keith) and signed matching long-term extensions with the Blackhawks years later.

And, now, 19 and 88 have one year remaining on those matching contracts. And the franchise they turned around is back where it was when they arrived: trying to determine its future.

There is no guarantee that Toews or Kane will begin or finish this season in Chicago. Or that one or either of them re-signs with the Blackhawks when their current contracts come to an end.

But for all of the jokes about the commercials (“Drive what Kane and Toews drive“) and magazine covers and history making moments each has authored for Chicago, they have been the faces of the franchise for 15 years.