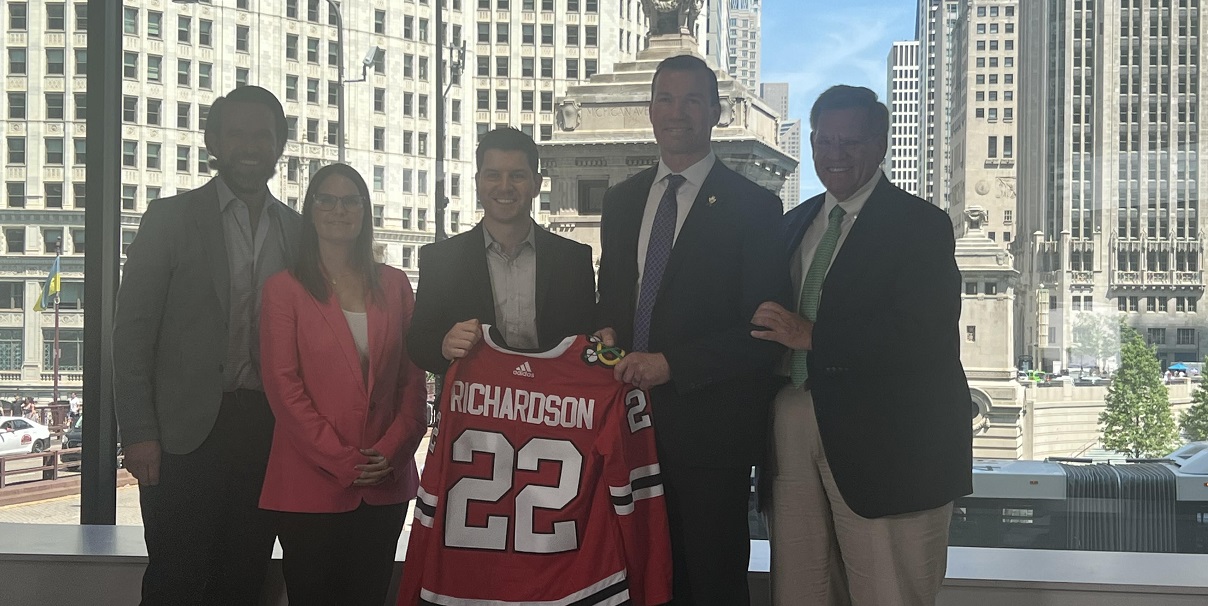 The Blackhawks formally introduced Luke Richardson on Wednesday morning at the Blackhawks Store on Michigan Avenue. With the Chicago River as the backdrop, the scene was perfect to meet the man who is being asked to lead the franchise through a fascinating transition.

And fans should be tremendously encouraged by what both Richardson and general manager Kyle Davidson had to say on Wednesday. Here are a few key takeaways from the press conference.

The foundation is here

Richardson has been around the game for a long time. He played in the NHL for more than 20 years and appeared in more than 1,400 regular season games. He’s been an assistant coach in three organizations and a head coach at the AHL level. We’ve been over his resume. But he’s a first time head coach in the NHL.

With a new front office group in Chicago and a team that is openly in transition, why would he make his first run at a head coaching gig here? I asked Richardson what stood out to him about the Blackhawks’ group that was interviewing him.

He immediately spoke about the fact that there’s a confident foundation in place to take the organization in the new direction. And he had plenty of time to get to know them in both formal and relatively informal settings.

Richardson said his first interview a couple weeks ago was more than four hours long. When he came back last week, the interview went well and then he joined members of the front office for dinner to watch a game of the Stanley Cup Final. They watched the game with the eyes of a coach and front office, but also as fans.

And the front office liked what they saw in Richardson from afar before asking Montreal for permission to speak with him.

Richardson spoke about his understanding that the team is intentionally going to take a step back to move forward in the right way. But that doesn’t mean he’s been asked to be bad at his job, and that’s not who he is as a coach or person.

He reiterated a story about bag skating a team when he was the head coach in the AHL. He told them their effort wasn’t good enough and told them what was about to happen. Then he tightened up his own skates and took part in the bag skate along side them.

Richardson acknowledged that he isn’t in the same shape he was as a player and tried to hide how hard the work was (which got a chuckle from the media in attendance), but he was going to show his players that he is going to do it with them. It isn’t about him vs. the roster. They’re working to collectively get better.

That anecdote is a terrific microcosm of the many comments made by players who use to play with and for him about his competitive nature. He wants to win, but he also wants to make others better.

Nothing set in stone

What stood out most to me was when Richardson was asked about his ideal system and the players he wants to have to make that work. He actually backed away from “my system” as an answer and instead spoke about getting to know his roster and working to make them better.

Richardson said his system will likely be build around the roster he has, but they’re going to be hard to play against. And that system will evolve as the players improve and the roster changes.

What a breath of fresh air! After Jeremy Colliton’s tenure as head coach during which there was friction between him and some of the veteran leaders on the roster, a head coach openly speaking about putting players in position to succeed and building a system around the (relative) strengths of the roster has has been given is a mature, wise approach.

Especially when both Richardson and Davidson were open, again, about the team not necessarily being a Stanley Cup contender in 2023.

As you have undoubtedly heard by now, Richardson made his NHL debut at the Chicago Stadium in 1987. He was asked about what he remembers from that special day in his life, and what he looks forward to being the head coach of the Blackhawks.

Richardson shared a fun story. His roomate with the Maple Leafs on the road trip for his NHL debut was none other than Eddie Olczyk, who took him under his wing and tried to prepare him for the big stage at the old barn. Edzo took him to breakfast and told him to be ready for the National Anthem.

He wasn’t ready for the atmosphere at the Chicago Stadium; he admitted there were times during that game that he felt like a fan, taking in the entire experience. And he spoke about the Anthem being something that was imposing as a visitor, both at the Stadium and still today at the United Center.

And Richardson looks forward to that being a benefit to him and his “side” of the action in the future.

His relationship with Edzo lasted well beyond their time as teammates in Toronto. He spoke about the role Eddie and his family played in his family dealing with the loss of his daughter a decade ago. The hockey family was there for his as they experienced unthinkable loss.

This is truly a new day for the Chicago Blackhawks. Their rookie general manager sat next to a seasoned veteran of the NHL who is, now, a rookie head coach. They spoke about where the Chicago Blackhawks are going as a franchise, their expectations for the team’s performance on the ice and how the franchise is going to get back to where it was a decade ago.

If you watched the press conference and your takeaway wasn’t optimism, we can’t help you. This is a terrific hire by Davidson and the Blackhawks and Richardson looks like a coach who can do what Davidson said his goal would be for the next head coach: grow and develop young players and still be the man when it’s time to be on top again.

You can watch the entire press conference below.