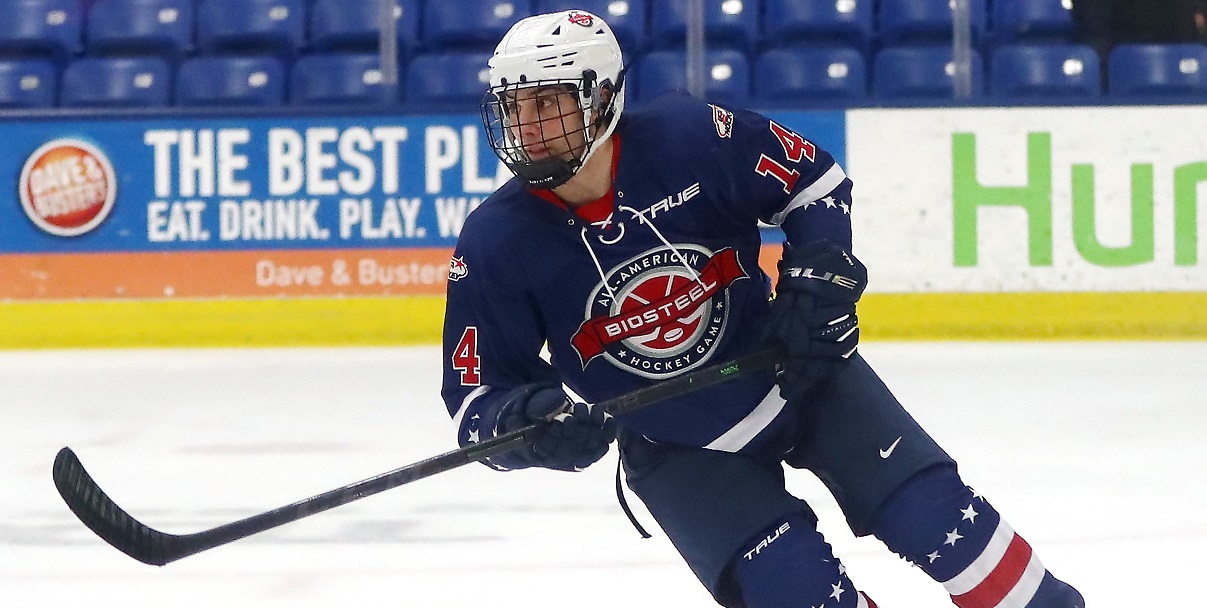 The Blackhawks’ second stunning trade on Thursday was sending Kirby Dach to Montreal for two picks in this year’s draft, including the 13th overall selection. With the 13th overall pick in the 2022 NHL Draft, the Chicago Blackhawks selected center Frank Nazar.

Background: Nazar was a significant player for the US program, often lining up as a top-two-line center.. He was highly productive as an underage player, scoring over a point a game. He’s committed to Michigan.

Analysis: Nazar brings a lot of speed and energy to his shifts. He lacks ideal NHL size, but he makes up for it with his effort. He is hard on pucks, and shows no fear in how he attacks the interior third of the offensive zone. He can make an occasional flashy deke or pass, but most of his offense comes from the high percentage areas. Nazar’s great speed helps him get to the net and turn around a lot of defenders. He projects as a third-line center with a chance to be a No. 2 center.

One of the most exciting and entertaining players in this draft, Nazar has quick feet and quick hands. Despite not being the biggest guy, he is an effective center who can make plays all over the ice. He makes everyone around him better and makes opposing defenses look foolish on a regular basis. Nazar’s anticipation is off the charts and he processes the game at a speed that matches his hands and feet. If he were bigger, we’d be talking about him as a top-three potential player in this draft. But he does have a lot of strength he’s going to need to add to be an effective player at the next level. It’s hard for 5-foot-9 centers to get drafted in the top 10, but I think a reason Nazar has a chance is he’s competitive on all pucks and uses every ounce of the strength he has to compete for pucks in all areas of the ice. The NTDP forwards are all especially defensively responsible and Nazar is no exception. I think he has star potential if everything goes right for him these next few years at Michigan.

Few dash around the ice and make plays in this draft like Nazar does. Nazar turned me into a big fan last season and he has continued to add layers to his game. He’s a threatening player from the hashmarks because of his wrister, which he pops off of his stick with power and precision thanks in large part to the balance he displays through his weight shift (he’s not a particularly strong kid). He’s got quick hands, which help him deftly adjust in traffic to get shots off under pressure.

He flashes creativity throughout his game. He plays pucks into space as well as anyone in the draft, regularly executing through tight gaps in coverage. And he’s just a hungry, driven player who consistently targets the middle lane with his greatest asset: his skating. Nazar’s one of the fastest players in the draft, not only in straight lines and winding up through his crossovers, but also adjusting tempos (a learned skill that he really developed at U.S. NTDP). This allows him to impact play both with the puck attacking in transition to turn defenders or creating breakaways, as well as without it, speeding into lanes to get open for his linemates.

He also consistently supports the play high in the offensive zone without possession when that’s his role. He can be careless with the puck and try to do too much at times but he’s also capable of going right into coverage to make something happen. He’s still got some work to do to add muscle, but he’s an extremely gifted athlete who moves and does things on the ice that few can.