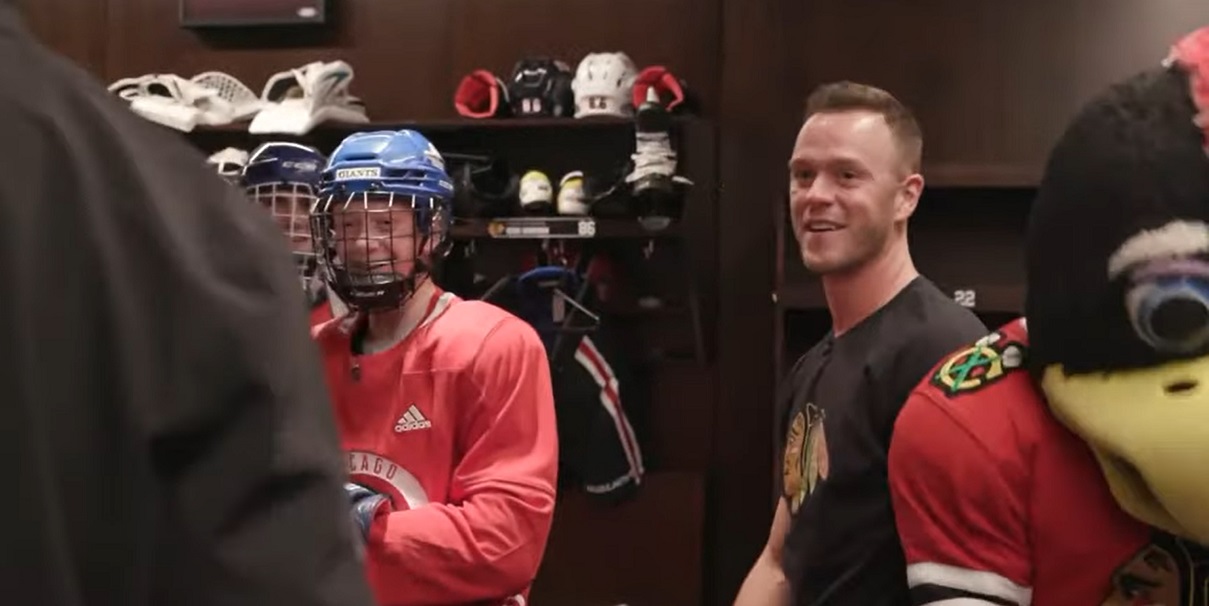 Yesterday, the Chicago Blackhawks were out in the community on a day of service before opening training camp. The climax of the day was hosting the Highland Park Giants hockey team at the practice rink.

The event was a total surprise to everyone involved, with general manager Kyle Davidson greeting the team as they got off their bus and head coach Luke Richardson speaking with them shorlty thereafter.

But THEN Richardson introduced the team to two icons.

In walked Jonathan Toews and Patrick Kane to the thrilled, shocked, excited faces of the young team. And watching the moments as the two Blackhawks greats shook hands and then talked to the players hit me right in the feels.

Why did this hit me as hard as it did? I asked myself that question a few times before putting the words down here. And it became painfully clear.

These kids are high school age hockey players, meaning they’re generally in the 14-17 age bracket. Which means they have never known the Chicago Blackhawks without Toews and Kane.

And, frankly, I found myself getting nostalgic quickly watching these two “kids” — who have become men while we all watched — represent their team in a wonderful moment with a team that really needed a pick-me-up before their season begins.

This is how I still picture Toews and Kane far too often:

Two teenagers — barely older than the players they greeted yesterday — who were about to embark on the ridiculous task of making the Chicago Blackhawks relevant after years of futility.

On Monday, we watched as two men in their mid-30s walked into a room of kids who probably dream of being them when they grow up as representatives of a franchise that enjoyed the highest of highs during a dynasty run.

Jonathan Toews is entering his 15th season as the captain of the Blackhawks, an Original Six franchise that’s nearing its 100th anniversary. That’s more than twice the tenure of any other captain in the history of the organization.

Patrick Kane is chasing the all-time records for the franchise and has been one of the most dynamic players the team has ever seen. As the first and still only No. 1 overall pick in franchise history, he has exceeded any expectations while playing in Chicago.

There have been their fair share of ups and downs. Not everything has been perfect. Toews has dealt with health issues throughout his career and Kane had his off-ice problems when he was younger. And many fans have their perspective on their responsibilities in the wake of the Kyle Beach investigation, a situation that happened when Toews was 22 and Kane was 21.

Since then, they have grown up together into the faces of the franchise.

And on Monday, there they were greeting a group of young hockey players on behalf of the organization one more time.

We — the fans — have been incredibly fortunate to watch these two players during their careers. And, as what might be their final season in Chicago kicks off later this week with the start of training camp, seeing them represent the Blackhawks this way me appreciative of what they have been to fans as players.

The stands will probably have a few empty patches this season as the team puts a product on the ice that isn’t on par with the dynasty years. But if this indeed the finale for 19 and 88, the ovations should reflect their service to the franchise. And moments like Monday reminded me of what they mean to their fans.