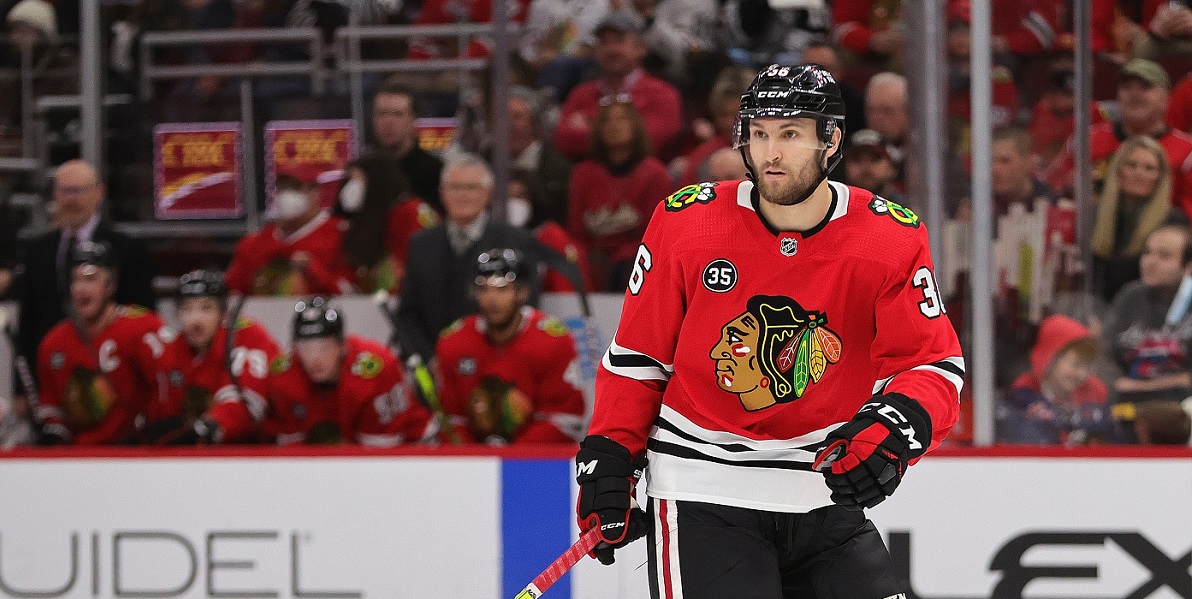 When he got the call to join the Blackhawks last season, Josiah Slavin took advantage of his opportunity. In his second NHL training camp, he’s looking to impress a new front office and coaching staff, so when the door opens again, he’s ready.

Slavin was originally a seventh-round pick by the Blackhawks in 2018. Guys who wait through 192 other names being called rarely get a crack at the NHL. And only nine players drafted after the fourth round in 2018 have seen a single second of NHL ice time to date.

The route from the seventh round to the NHL can be a long one that never materializes. Josiah had the benefit of learning from his older brother, Jaccob, who was a fourth-round pick by the Carolina Hurricanes in 2012 and made his way to their NHL club during the 2015-16 season.

Josiah followed his brother’s path to an extent, but it didn’t come as quickly. Josiah spent two years in the USHL (one in Lincoln and a second with the Chicago Steel) before following Jaccob’s route through Colorado College. He spent two years at CC in the NCHC (which he confidently said is the best college hockey conference), and credits that with helping him make it as far as he has in the professional ranks.

He spent most of last year in Rockford and started to show leadership traits that earned him the “C” on his chest for the Tom Kurvers Prospect Showcase a couple weeks ago. He scored 18 goals in 49 games with Rockford last year, which was probably more offense than people thought he would produce going into the year.

Slavin made his NHL debut on Dec. 2 last year in Washington, and picked up an assist in his first appearance with the big club. Two weeks later it was his brother getting another fun phone call from Chicago. It wasn’t from Josiah, who had played seven games at that point. It was from Jaime Faulkner to let Jaccob know she had been named the President of Business Operations with the Blackhawks.

Faulkner hosted Jaccob as his billet family during his season with the Chicago Steel and they had become close. So having a family relationship with someone in the Blackhawks’ new-look front office was comforting.

Slavin isn’t a guy who’s going to skate top-line minutes; he’s a checker who plays a defensive game. He told me Ryan Carpenter took him under his wing last year and that made a huge impact on him, noting that their styles of play are similar.

But Slavin knows even if he ultimately grinds out a niche as a defensive forward, he needs to grow his offense. He told me on Monday that he’s working on bringing more offense to the table, specifically keeping his head up and having better vision in the offensive zone.

He made the jump to the AHL after 22 games at CC in 2021 and was able to produce seven points in 15 games with Rockford to finish the year. After that he came to Chicago for his first training camp.

The biggest difference between his game one year ago and Slavin today is his confidence. He’s been here long enough now that he’s more comfortable approaching coaches and teammates alike. It also helps that the players in this year’s camp are younger than last year’s collection of veterans.

“When you come in not knowing anybody it can be hard to talk to people,” Slavin said. “So with this being my second year I know people better and we’ve had those conversations and confidence to approach coaches this year.

“There are a lot more young guys here [in camp] now, so the dynamic’s a little different than it was last year. I think we have a good group of guys in the room and the older guys have been the perfect veterans for us. They’re showing us the way it needs to be done and as a young guy I really appreciate that.”

His confidence was on display in practice Monday when the Blackhawks were working on special teams. Slavin scored a couple pretty short-handed goals in the same drill that warranted a reaction from many of his teammates in the first group (which was largely NHL players).

It looks and feels like the Blackhawks have enough bodies to fill out 12 or 13 forwards on the NHL roster and Slavin may see his 2022-23 campaign begin in Rockford. But he has shown this summer with his captaincy at the Kurvers showcase and in this training camp that he’s ready for the NHL.