3 Takeaways From the Blackhawks’ Fifth Preseason Game Skip to content 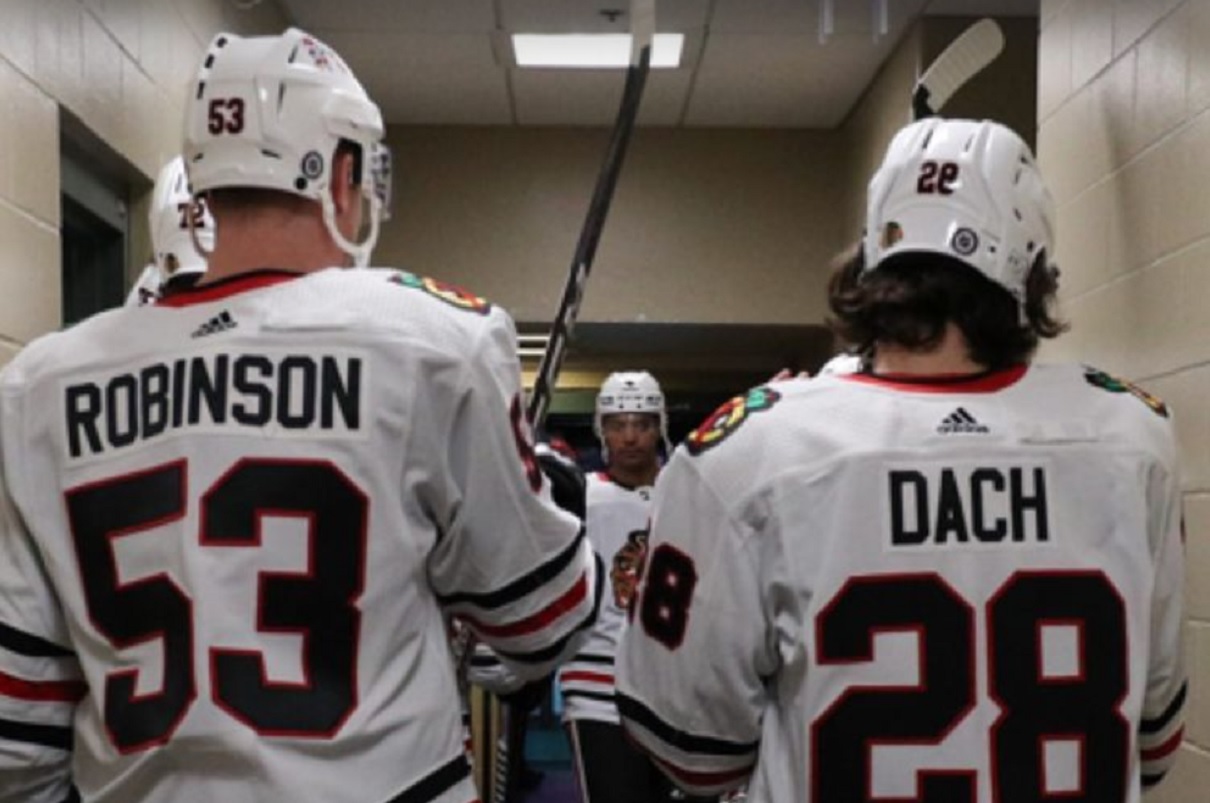 After getting shut out in consecutive games, the Blackhawks mixed up their lines (but left Patrick Kane home) in Minnesota. This game didn’t end with a doughnut on the board, but it was another loss.

This was the first preseason game that was made up predominantly of potential NHL roster players; with the exception of a few guys who might get a temporary opportunity because of injury, most of the guys in Minnesota will likely have a role on the big club this year.

So what did we learn about the Blackhawks tonight?

Kirby’s little brother cleared concussion protocol and, after a few days of practice, he got to dress for a preseason game on Thursday night in Minnesota. He had a really good rookie camp and scored early in the first prospect showcase game (also against Minnesota) before leaving that game/weekend with the concussion.

Colton showed some really good signs early. The speed is clearly there. He started on a line with Sam Lafferty and Mackenzie Entwistle and that line was fast on the puck early in the game. There were a couple times in the first period that he was caught chasing the puck a little defensively but he skated 4:37 with a couple hits in the first period of his NHL (preseason) career.

Dach got some power play time in the second period when the Hawks had an “advantage” and he was the first player in a white sweater happily willing to shoot the puck. It was refreshing to see someone actually get the thing on net. He didn’t score, but at least he got the memo about shooting the damn thing.

Colton was one of the Blackhawks’ best players in this game. He led the Blackhawks with five shots on net and was credited with a team-high three hits. He also saw 3:52 of power play ice time in his 14:10 total.

I don’t know if there’s a scenario where he makes the NHL roster out of camp — especially with Lukas Reichel in Rockford — but this was a great showing. He’s added some muscle, speed and confidence to his game and it showed.

After making it a priority to get the puck on net after two straight shutout losses, the Blackhawks allowed two goals in 13 seconds in the middle of the first period. After 20 minutes, they were looking at a shot sheet that favored the Wild 15-4. Four shots on goal — none of which came in the final 10:45 of the period. No bueno.

The Blackhawks actually did shoot the puck in the second period and guess what? Jack Johnson scored a goal!

The Blackhawks out-shot the Wild 7-5 in the second period and they got on the board, which was important in the Moral Victory category. By the 13-minute mark of the third period the Blackhawks had taken the lead in shots on goal in the game, and they finished with a 26-23 shot advantage… but a 4-1 loss.

So how do we feel about some of the guys trying to make the roster?

Stock Up: Alec Regula — with Caleb Jones, Jake McCabe and possible Connor Murphy missing right now, there’s a huge opportunity for young defensemen to show well and grab some ice time in the NHL. Based on how the ice time was distributed on Thursday night, Regula is doing the right things right now. He got over four minutes of power play time, skated almost 90 seconds more than Alex Vlasic, and was credited with four shots on net. He’s had a good camp and took another step forward in Minnesota.

Stock Up: Mackenzie Entwistle — he was on the line with Lafferty and Dach to start and saw some action on penalty kill duty. I like his size and speed on the ice and he knows his role: he’s there to be a defensive player in the bottom six. I’m not sure he sticks in the NHL out of camp (unless Jujhar Khiara isn’t ready) but I liked what I saw last year and approve of us seeing more.

Stock Down: Buddy Robinson — his gaffe that led to Minnesota’s first goal was bad. But mistakes happen; Jonathan Toews had a boo boo (well, ill-advised pass to a tired skater trying to get off but it still hit the tape and turned into a bad turnover). However, the Toews issue was at the end of a long shift that happened because Robinson couldn’t clear the zone. He’s a huge human being but I really don’t see it.

Stock Down: Blackhawks’ Centers — the eight guys not-named-Toews combined to win 12 of 24 faceoffs. Read that again: eight guys took 24 combined faceoffs. Toews took 23 faceoffs in the game (he won 11). Max Domi won five of seven but most of his were in the first period. No other Blackhawks’ forward took more than Reese Johnson’s five faceoffs. The Blackhawks cannot rely that heavily on Toews at the dot all year. They just can’t. But here we are again.