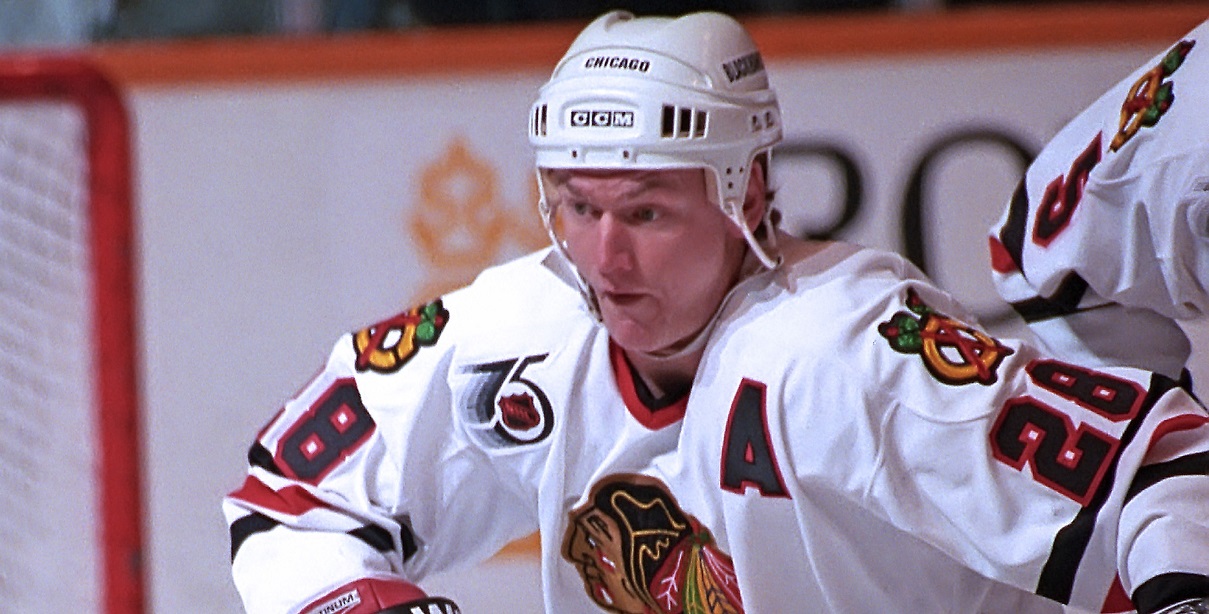 This month’s edition of our Steve Larmer appreciation series (remember: #retire28) is an easy one. And, ironically, it’s partially sourced from the retirement of another player’s jersey in Chicago.

I can’t tell you how many people have texted me or hit me up on Twitter or Facebook or Instagram with a message about Marian Hossa‘s book and jersey retirement ceremony. He tells the story about the family buying him his first NHL jersey on page 131 in the hardcover version of his book, and shared it in part during his speech.

“When I was 11 years old, my Slovak hockey team came to Quebec City to play in a pee-wee tournament. One of the families wanted to buy me a gift, a jersey of my choice. I did not hesitate: a red Chicago Blackhawks jersey, No. 28, Steve Larmer,” he said. “It was the first ever Blackhawks jersey I wore, and I remember it vividly today.”

If you watched both players play, you would understand why. Hossa and Larmer covered every inch of the ice with effort. They were brutally hard to play against in any zone of the ice. Hossa finished the Blackhawks portion of his career with 18 short-handed goals; Larmer scored 19 times while killing penalties for Chicago.

For the sake of comparison, since his name is hot right now with what many consider to be a soft group of new names on the ballot for 2023, Alexander Mogilny averaged 1.04 points per game with 20 short-handed goals in his career. Mogilny finished his NHL resume plus-81 in 990 games.

I don’t point to plus/minus as the strongest gauge of a player’s contributions or impact on the game, but when the number is significant, it’s worth noting. There are seven (7) right wings in the history of the NHL (since they started tracking plus/minus in 1959-60) who have at least 1,000 points and are at least plus-200 (in order of most career points):

You know what’s crazy about that seven-member group? The only other guy on the list who isn’t in the Hall of Fame is Jagr, who hasn’t officially retired yet so he isn’t eligible. The other five were easily inducted. Which is just another example of how Larmer’s career was excellent despite being quiet and living in the shadows of Denis Savard in Chicago and Mark Messier and Brian Leetch in New York.

However, five of the seven right wings above averaged a full point per game and were at least +200 for their career; Hossa and Anderson were not a point-per-game player for their entire careers.

Back in 2014, before the Blackhawks won their third Stanley Cup championship with Hossa but after he reached 1,000 points, Hossa’s style of play was compared to Larmer’s by Ken Campbell at The Hockey News. At that time, Campbell’s hot take was that Hossa maybe wasn’t a sure-fire Hall of Famer, noting that Larmer still wasn’t in at that point.