Are the Rangers Signaling the Potential Availability of Alexis Lafrenière? And Should the Blackhawks Be Interested? Skip to content 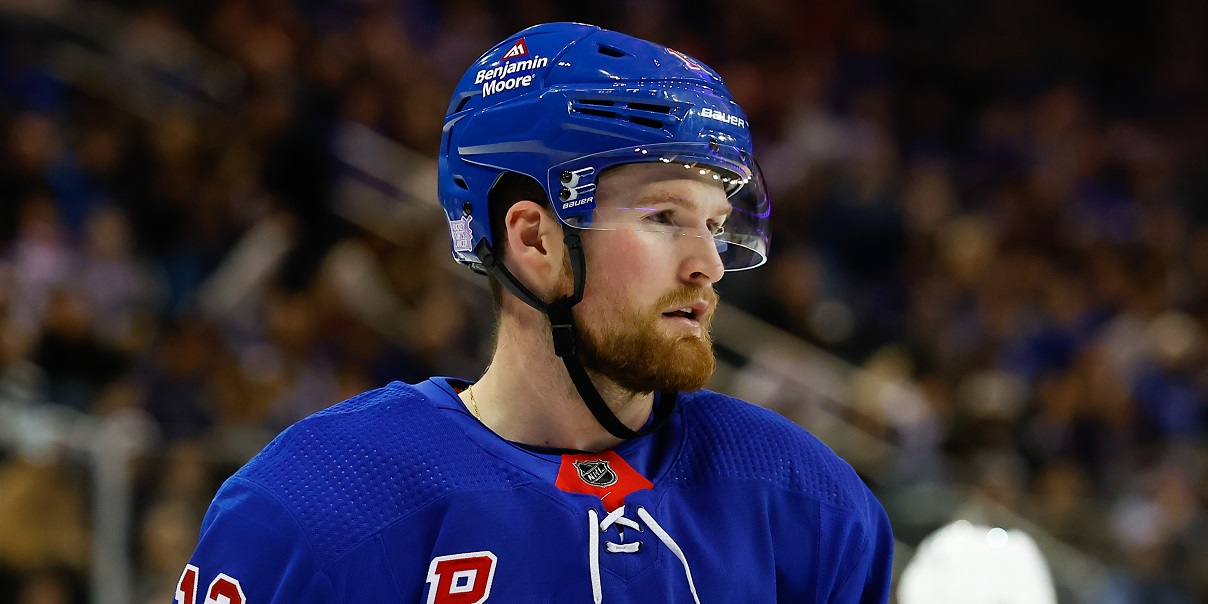 After a disappointing effort Tuesday night in their return from the Christmas break, the New York Rangers are reportedly throwing their forward lines into a blender. And the No. 1 pick in the 2020 NHL Draft, Alexis Lafrenière, will be a healthy scratch.

To say the Rangers are a mess right now might be an overstatement, but they certainly have/had big things in mind this year. They’ve built around a good young nucleus and have some big-time star power at the top of the lineup, but it feels like they’re in Stanley Cup or Bust mode.

Which is a big reason why they continually get mentioned as a destination for Patrick Kane when the Blackhawks start answering calls on the future Hall of Famer (officially).

The question always comes back to if the Blackhawks would target young players on the Rangers, and the name the regularly gets mentioned up front is Lafrenière. He was a highly touted prospect — easily the top rated prospect — heading into the 2020 draft but hasn’t been able to emerge as the star player many felt he could eventually become.

When you look at the numbers Lafrenière put up in juniors, it’s easy to expect him to be a top of the lineup contributor. His three seasons with Rimouski in the QMJHL resulted in 80, 105 and 112 points. For those doing the math at home, that’s 297 points (including 114 goals) in 173 games. But it hasn’t been there. Not yet.

Last year, Lafrenière scored 19 goals in 79 games and his line with Kaapo Kakko (the No. 2 pick in 2019) and Filip Chytil (the 21st overall pick in 2017) was impressive during the playoffs this past spring. Lafrenière had nine points in his first 20 playoff appearances.

This season, however, Lafrenière has just five goals in his first 36 appearances. And there are reports scouts haven’t been pleased with his approach.

Rangers head coach Gerard Gallant agrees with the assessment that there needs to be more consistency from his game.

“I want him to be better,” Gallant said when Lafrenière appeared on the fourth line at practice yesterday. “He’s got some chances to play with good people and he’s played well at times, but it’s the inconsistency.”

Now it appears Lafrenière will be in the press box for the Rangers’ game on Thursday night.

There have been questions about not only Lafrenière’s approach, but also his skating. The inability to create separation at the NHL level has been one of the biggest reasons he’s struggled to get above a bottom-six role regularly for the Rangers.

Here’s the thing: Alexis Lafrenière might be a case of a kid who needed more time to develop. Perhaps somewhere new. When he jumped straight to the NHL, many accepted he would need time to grow into a top-six role (which hasn’t happened). Now he’s in the final year of his entry-level contract and isn’t showing the growth many had hoped to see — apparently including the Rangers organization.

If Gallant is comfortable scratching the former top pick, it obviously makes you wonder if he would be available if/when the Rangers call about Kane. But my bigger question is: would the Blackhawks be as interested in a player whose profile feels awfully similar to a guy they traded to Montreal this past summer, Kirby Dach.

Jason Dickinson was also a first-round pick who struggled to find “it” in Vancouver, and he’s been a nice addition to the Blackhawks’ lineup. But the Blackhawks got him in a salary dump deal that had a second-round pick attached for a depth defenseman (Riley Stillman).

It’s easy to use Dach and Dickinson as the “change of scenery” reason(s) to consider Lafrenière. And he’s still young enough that there’s a legitimate case of that being possible. I wouldn’t say that just because Lafrenière was a No. 1 overall pick recently is enough to have his value in a trade for Kane to significantly impact the other assets the Blackhawks would target in a trade, however. At this point, his profile is as a third-line player, and we shouldn’t view him as more than that.