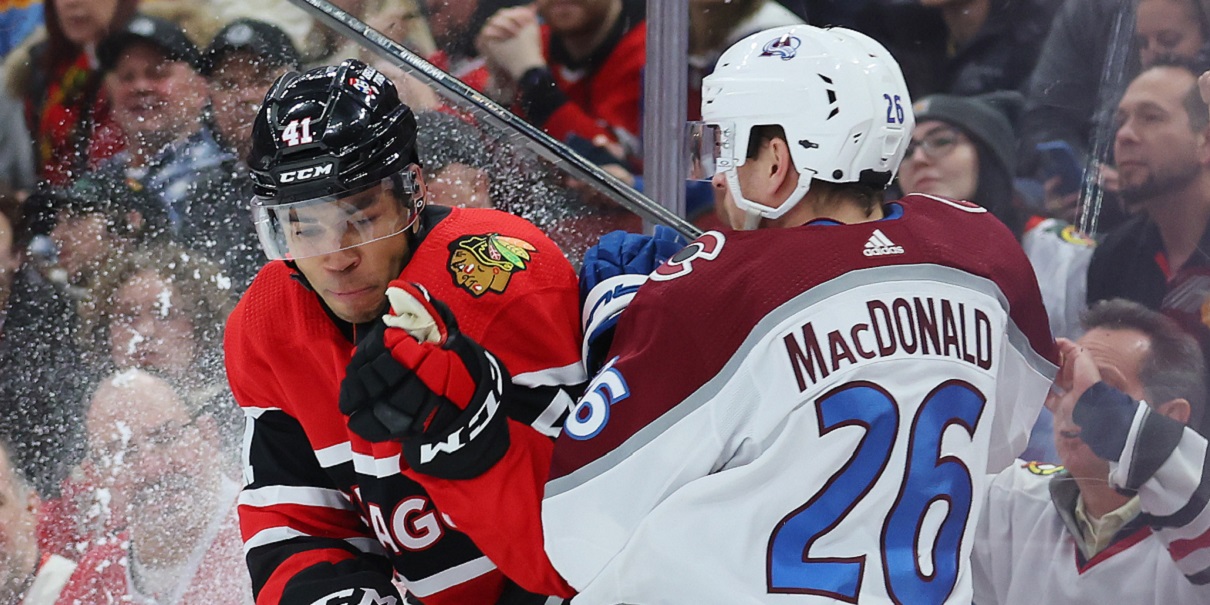 The first two periods of this game were complete opposites. Chicago spent a lot of the opening 20 minutes defending and on their heels; they turned the tables on the defending champs in the second and were the more aggressive team. The result? The Blackhawks had a 21-20 shot advantage and the score was tied at two after 40 minutes. Oh, and the teams were 0-for-7 on the power play combined (Colorado 0-4).

A crisp passing sequence started by Jonathan Toews gave the Blackhawks a 3-2 lead at 6:36 into the final frame. From there, the Blackhawks were white-knuckle hanging on as best they could. The game started to get chippy in the third period, too. With 4:51 left in regulation, it appeared Alex Newhook scored a tying goal but the Blackhawks challenged goaltender interference on the play. The challenge was a huge decision by the coaches — if they lose, the Avs get a power play after tying the game. If they win, they still have the lead. And they won the challenge — and, almost five minutes later, the game.

And what do we call it when a team wins three in a row?

One theme on the night was players who didn’t have a well-padded stat sheet hitting the box score. Colin Blackwell picked up just his fourth assist of the season on Sam Lafferty‘s goal in the first period. Isaak Phillips was credited with his second career NHL assist and Petr Mrazek picked up his first assist since the 2018-19 season on Andreas Athanasiou‘s goal in the second.

The Avalanche came into the game ranked 12th in the NHL on the power play at 23.7 percent. They got five (5) power plays in this game and weren’t able to score. The Blackhawks — who came into the game 29th in the NHL in penalty killing (72.5 percent) — committed to blocking shots defensively and the forwards did a great job of taking away space and the PK unit had a really good night.

He was exceptional at the dot again (he won 14 of 20) and his pass across the offensive zone to Tyler Johnson started the play the ended with Taylor Raddysh scoring his 11th goal of the year to give the Blackhawks a 3-2 lead. That line might have been the Blackhawks’ best all night, and a lot of that started with 19 winning a draw. They aren’t the fastest line, but they were controlled and played well as a unit.