Must-Read of the Day: Rajon Rondo Vents About His Time with the Bulls | Bleacher Nation Skip to content

Remember when Rajon Rondo was on the Bulls? I’m sure you do, but the time since we’ve last seen him in a Bulls jersey has felt like something closer to two decades than two seasons.

In any case, during that Rondo season, the Bulls went to the playoffs and stole two games from the Boston Celtics in the first round … before Rondo got hurt and the Bulls dropped four-straight. All things considered, it’s a miracle that team, which looks like a bit of a hot mess in retrospect, got that far in the first place. Indeed, if you want to go re-live that season, go take a look at the basketball reference page. I’m sure you’ll quickly remember that while it may have felt fun at the time in some ways, the Bulls were ultimately on a path to nowhere.

And I think this all feels especially evident after reading Bleacher Report’s recent piece on Rondo and his NBA path. In a segment of the article by Ric Bucher, Rondo talks about his time in Chicago and it’s your must-read of the day:

Rajon Rondo on playing with LeBron, not being able to find an NBA home and living down a reputation: https://t.co/Ovvl3pHDHj

The section about his time on the Bulls doesn’t run too long, but it’s mostly filled with Rondo expressing frustration regarding the circumstances in Chicago. Specifically, he points out how the Bulls traded for Cameron Payne and then started Michael Carter-Williams and Jerian Grant over him (Yeah, I feel for you, Rondo).

A lot of what Rondo says alludes to the fact that the Bulls didn’t really have a direction for the team either (something that still keeps me up at night): “There was no, ‘Let’s figure this out, let’s go over the game plan.’ It was, ‘We’re done with you, put you on the shelf,’ and then obviously they had to come back to me,” Rondo said.

Fast forward two years and none of the players on that team are still with the Bulls, besides Cristiano Felicio and Denzel Valentine. Honestly, it’s not shocking considering how dysfunctional that season seemed, but, again, we’re talking about just two years ago.

Like him or not, Rondo knows the game and it’s hard to deny that he’s the sort of facilitator that can simply help teams win. This story gives some good insight into the power of a player like that – the sort of player the Bulls could probably use today – and the importance of having a cohesive plan and eye toward the future. Make sure you check it out.

Wait, What Did Brian Windhorst Say About the Bulls and Bradley Beal? 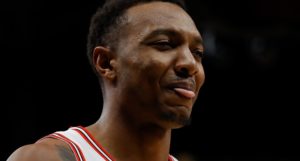 Come On, Friends: Wendell Carter Jr. vs. Daniel Gafford Is a Non-Debate