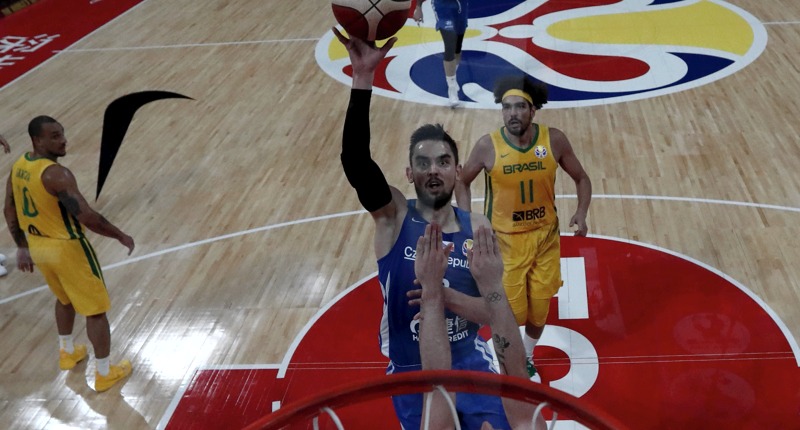 Yup, he did it again.

Tomas Satoransky has turned into THE player to watch at the FIBA World Cup, most recently leading the Czech Republic national team to its third victory.

Attn Bulls fans: While you were sleeping Tomas Satoransky wrecked Brazil and the Czech Republic pulled off a second straight upset in the World Cup.

You certainly have my attention!

Also, when Windhorst says “wrecked,” he means it. The new Bulls point guard tallied his best stat line of the tournament with a 20pts, 7reb, 9ast and 3stl night. He’s now shooting a 45.5 percent clip from the field and 50 percent from behind the arc (Note: he hasn’t hiked up too many three-pointers thus far, but he’s 6-12).

For a better look at just how well-rounded Satoransky has been, here’s his stat line from all of the previous four games. Let me know if you need a fan to cool off after reading:

I don’t know about you, but I sure do like everything about that. The assists numbers particularly act as a breath of fresh air knowing the Bulls are in desperate need of a true facilitator. Also, it’s worth mentioning, Satoransky has played the 9th-highest amount of minutes per game during this tournament at 32.4, so to say he’ll be well conditioned for Training Camp in a couple of weeks is probably an understatement.

Anyway, feast your eyes on the highlights from Satoransky’s latest masterpiece.

You love to see it, and Keith Smith, I’d have to agree.

Satoransky has been one of the best players throughout the World Cup. Saying it again: The Bulls got a steal in him. Chicago is going to compete for the playoffs this year, which would be huge for the development of their young players. https://t.co/TRBJV0u6qD