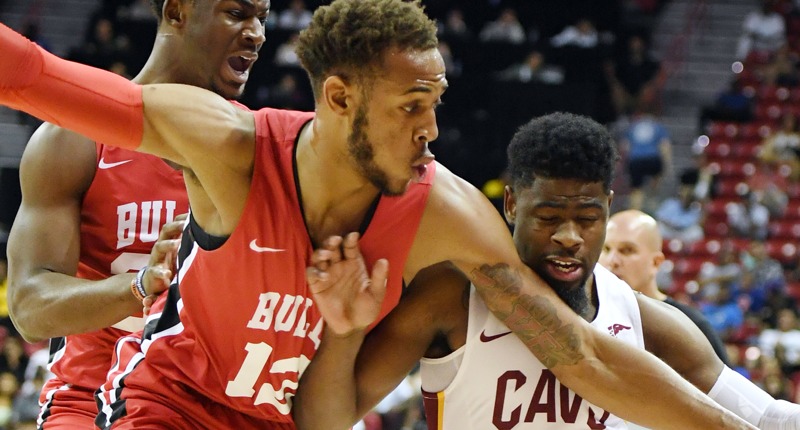 You might remember that quote from The Dark Knight Rises, but it jumped back into my head when I was thinking about the 2019-20 potential of Bulls rookie Daniel Gafford. Although he was selected by the Bulls in the second round of the 2019 draft (No. 38 overall), Gafford sure feels like a steal in retrospect.

In case you forgot: Gafford first came onto our radar during his 2017-18 season at Arkansas, when he was one of the better centers in college basketball. Despite his first-round projection that year, Gafford withdrew his name from the draft and returned to Arkansas for a sophomore season. And while he did post even better numbers the second time around, Gafford’s stock ultimately fell.

But it’s not particularly easy to understand why Gafford wasn’t as hyped this summer. Sure, he was a year older and was no longer the shiny new toy, but he’s still only 20-years-old *today* and, again, followed up with an even better season at Arkansas. In fact, reporters even asked him about the apparent drop-off in attention during his introductory press conference and he wasn’t quite sure, himself. Lucky break for the Bulls, I guess.

Indeed, it seems quite possible the Bulls were able to grab a first-round talent in the second round of the draft – something that’s even more believable after watching his performance in Summer League this offseason (averaged 16.9 points per game with 8.7 rebounds and 2.0 blocks per game).

I mean, if you don’t know with what he’s capable of doing, just check out this game he had against Fresno State in college:

A quick reminder of what Chicago Bulls draft pick @Dan_G33 can do.
Looking forward to seeing this guy in the league!!pic.twitter.com/CBUuJR32Zg

“But how will he matchup against NBA-level talent,” you ask?

Considering the Bulls lack of experienced depth at the center position, the general consensus seems to be that Gafford could easily become the back-up over the course of the season.

Perhaps you’re not thrilled to be rotating between two 20-year-olds at the position, but that might be the Bulls’ best option. In fact, it might actually be a perfectly fine option, considering the talent and upside possessed by Wendell Carter Jr. and Gafford. And when you take into account Gafford’s rim-protection, plus his ability to run up and down the court (he’s like a gazelle), it’s not difficult to imagine how he’d be a useful asset on this fast-paced team.

I mean, sure he often struggles to make baskets from practically anywhere more than five-feet from the rim, but his athletic-upside alone is reason enough to have him on the court (and it’s not like he can’t continue developing/improving in the other areas, as well).

In any case, Gafford is in line for some significant playing time this season, and while we’re all excited to see what Coby White brings to the table, it’s fair to say Gafford’s minutes should be just as heavily anticipated.