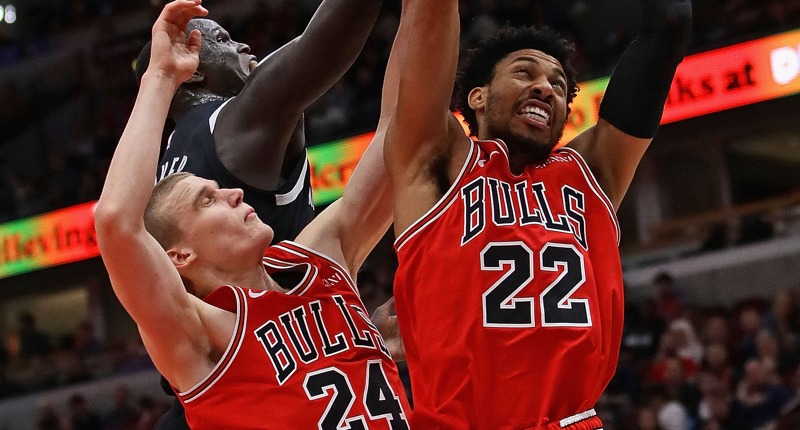 When the 2019-20 season tips-off on October 23rd, the Chicago Bulls will run onto the court as the second-youngest team in the NBA.

And while that comes with plenty of advantages and reasons for optimism (especially long-term), it’s also easy to say that youth (er, rather: a general lack of experience) will be the team’s largest hurdle this season.

After all, the Bulls starting rotation will not feature a single player over the age of 27-years-old, and that’s assuming newly acquired point guard Tomas Satoransky earns the starting job. If Satoransky doesn’t run out on the court against the Hornets on opening night, Otto Porter will most likely be the starting lineup’s oldest player at a crotchety … 26-years-old.

Consider the four confidently-expected starters (Lauri Markkanen, Zach LaVine, Otto Porter and Wendell Carter Jr.) and note that not one Bulls lineup last season featured all four of these players (when Porter joined the team in February, Carter Jr. was already shut down for the season due to a thumb injury).

And even if you take Carter Jr. out of the equation, you’ll find that Porter played only 325 total minutes alongside LaVine and Markkanen. In fact, those three players appeared in only 13 games together. Granted, they did manage to go 7-6 during that stretch, but still … we’re dealing with a very small sample size, and those players didn’t have much time to feel each other out on the court.

But at least the trio of Markkanen, LaVine and Carter Jr. have some experience together, right? Sorry, wrong.

Shockingly, a lineup that featured these three players was on the court for only 297 minutes last season (per Basketball-Reference). To reiterate that crazy stat, Porter Jr. who was acquired in February and played only 15 total games with the team had more minutes with the Bulls two young stars then Carter Jr. who played 44 games last season.

Markkanen sat out with an injury for the first 23 games of the season before returning on Dec. 12, where he then went on to play only 21 games with the rookie. During that stretch, Zach LaVine also missed five games with an injury. Together, the Bulls young nucleus played only 16 games last season. Talk about an inexperienced starting lineup.

With that being said, these Bulls’ offseason additions aren’t the only players who will take time to get comfortable. The starting players will be tasked with the same job.

For example, Zach LaVine is entering this season as the offensive alpha, but will now have more options on the court with Carter Jr. and Porter. Not to mention, he’ll have to adjust to having a real point guard to distribute the ball. As for Markkanen, he’ll have to learn how to anchor a front-court with Carter Jr., whose skill set is very different than Robin Lopez, the guy Markkanen became very accustomed to playing with last season.

Several people voguing for the Bulls this offseason have argued that this starting lineup feels just as talented as several high-profile teams in the Eastern Conference. Individually, each of these players has shown flashes of their potential, but playing together and building chemistry goes a long way. I’ve seen people claim teams like the Raptors, Bucks and Pacers don’t have as well-rounded of a lineup as the Bulls. While that may be true in some ways, they do have one key piece of their starting rotation the Bulls don’t, and that’s playing time together (also, each has All-Star’s … so that doesn’t hurt).

Young players take time to build chemistry on the court, and the Denver Nuggets are a perfect example of that. Before their breakout season last year where they won 54 games, the Nuggets went 40-42 in 2017 and 46-36 in 2018. Last season marked the third year that young players Jamal Murray, Nikola Jokic, Gary Harris, Will Barton and Malik Beasley were all playing together.

When all is said and done, the Bulls have several young, exciting pieces sitting on their roster, but they have to get on the court together. Basically, if you feel like this team isn’t reaching its full potential throughout this season, we may just have to accept it will take some time.