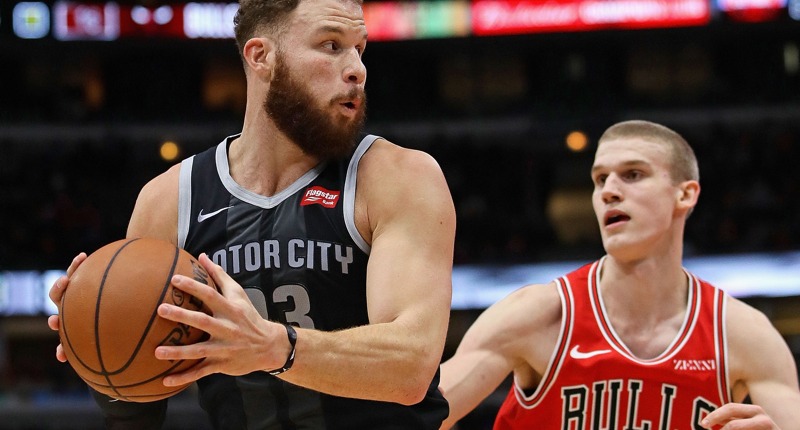 Let’s briefly imagine the 2019-20 Chicago Bulls make the playoffs (hold in your tears of joy, it’s only the 8th seed) … how did they get there? Or, more narrowly: Whom did they beat out for the final spot?

The way things are shaping up, the Orlando Magic and Detroit Pistons appear to be Chicago’s biggest threat (for now). Both teams made the playoffs last season and neither team lost any big names over the offseason – Orlando held onto both Nikola Vucevic and Terrence Ross, while the Pistons are still being led by All-Stars Blake Griffin and Andre Drummond.

But while both teams may ultimately stand in the Bulls’ way this year, I think it’s probably best to focus on the Pistons. They’re in the Bulls division, they have four head-to-head matchups, and they also pose an interesting challenge for this Bulls roster: a veteran-mentality with two All-Star bigs running the show.

Indeed, it seems the Pistons have several experienced players who could take advantage of the opportunity (er, well … four opportunities) to play against the second-youngest team in the NBA. So the Bulls will have to find a way to be better than them, if they plan to do anything with this season. So with that in mind …

Last season, the Bulls went 0-4 against this duo, but never had both Markkanen and Carter Jr. on the court. Still, together, Griffin and Drummond averaged approximately 44 points and 36 rebounds over the four contests. In other words, they dominated.

Of course, you could take solace in the fact that Carter Jr. did have a breakout game during the second matchup with 28 points and seven rebounds.

Having both Markkanen and Carter Jr. on the court (healthy) should create an extremely interesting big-man competition. The two may not have issues shot-blocking or staying in front of their opponent, but rebounding could become a problem. Both players are very capable rebounders, but Drummond is elite. The 26-year-old averaged 18 rebounds a game against the Bulls and had 20 (12 of which were offensive) in that second game where Carter Jr. went off.

As these four big man fight underneath the basket, the Bulls saving grace could be their backcourt. The Pistons do begin to mimic the Bulls youthful glow here with Luke Kennard, Bruce Brown and rookie Sekou Doumbouya. Although, it feels safe to assume stopping Zach LaVine will not be their specialty. The team did load up on guards this offseason, but that doesn’t necessarily mean they’ll be able to keep up with, what I would consider, the Bulls above-average athleticism.

On the other end, however, the Bulls will need to watch out for the three-ball. Detroit had 33.9 percent of its points coming from behind the arc, the 6th highest in the NBA (Not so Fun Fact: The Bulls were dead last in this category). Chicago will not only have to defend the three-ball well, they allowed the 5th highest percentage of makes last season, but also keep up by knocking down their own. Much easier said than done.

The real reason I’m highlighting this Bulls-Pistons matchup though is that I think it allows for great “status-check” games. How this rebuilding team battles two All-Star’s and a relatively grounded squad should tell us a lot about where they’re at as a team. We already know the Bulls can have an exciting, fun matchup with a team like the Atlanta Hawks. But, instead, I want to know if they can grind out wins. The Pistons may not be the best team out there, but they feel like a solid group to test this young Bulls team.