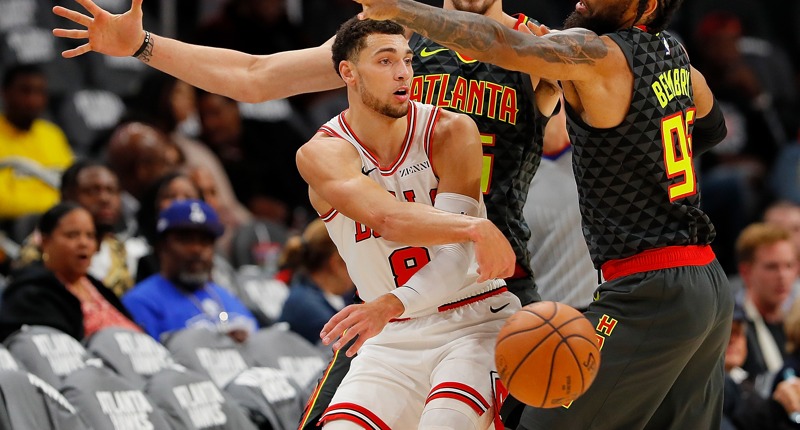 In general, his performance was All-Star caliber, and if he repeats what he did on the court again this season (and the Bulls put together some more wins), LaVine will almost certainly get the All-Star nod. Of course, that’s easier said than done – especially when the biggest thing standing between LaVine and his first All-Star appearance might be his teammates. Allow me to explain.

It’s hard to say whether or not the LaVine we saw last season was a product of the injury-plagued environment. He was one of the only players to stay relatively healthy over the course of the entire season, so the Bulls let him run wild. This season, however, the team should be working with a healthy Lauri Markkanen and Wendell Carter Jr., as well as a full-year of Otto Porter Jr. That could cut into his production, even as its better for the Bulls overall.

With that said, LaVine seems to recognize that in order to build a convincing All-Star campaign, he’ll have to adjust his game. In an interview with Fansided’s Gerald Bourguet, LaVine discussed as much:

I feel like everybody knows I can score and put up big numbers, but I feel like I’m able to create plays off of breaking down the defense for others. I gotta work on my turnovers, I try to make some risky passes where you get a little bit of tunnel vision and can make some turnovers, but I feel like those aggressive plays sometimes help your team out. Always, the league leader in assists have a lot of turnovers. As long as they’re aggressive, those are okay, but with my playmaking, I feel like I can take another jump this year. I have the ball in my hand a lot. I want to be able to play off the ball and get some easy points as well, but I’ve definitely been focused on my playmaking and being able to draw that double-team or create a line where I can get to the hole when I need to and then kick it out or drop it off to get easier looks for my teammates.

Oh, do the Bulls happen to need someone to step-up in the playmaking category?

File this one in the yikes category.

If you ask me, this is probably music to new lead assistant coach Chris Fleming’s ears. The Bulls are expected to ramp up their offensive pace and play a pretty unselfish brand of basketball this season. With no clear leader on the team, and a nice group of young players with which to experiment, sharing the basketball feels like the only reasonable formula offensively.

Considering LaVine will most likely draw the bulk of the attention from opposing defenses, it’s nice to hear he wants to take full advantage. Even with the revamped point guard position (now featuring Tomas Satoransky and Coby White!), LaVine will be an instrumental ball-handler this season. Both Satoransky and White have the size and skillset to play off the ball (presumably) well, which will allow LaVine to create on his own.

After all, he averaged 4.5 assists last season (35th-best), and that was with an extremely poor shooting team around him.

The point is, if you’re hyped about LaVine heading into this season, something like this should actually be the reason why. LaVine is a natural bucket-getter, but his innate skill set and athleticism allow him to be so much more than that. And that “more” is ultimately how he’ll earn the All-Star accolade on this team.