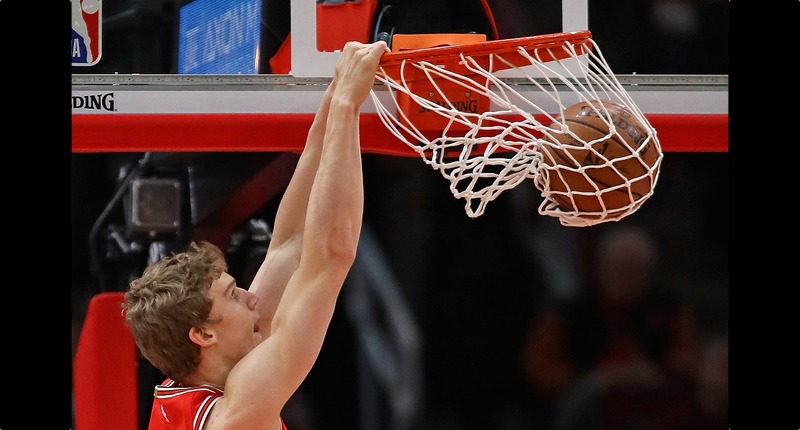 The Chicago Bulls continue to be well represented in Top-100 rankings.

Otto Porter (No. 90), Zach LaVine (No. 55), and Lauri Markkanen (No. 50) each earned a spot, while new Bulls forward Thaddeus Young missed the mark after being ranked No. 70 on SI’s Top-100 (and the fifth best defensive power forward in the NBA just this morning!).

Lauri Markkanen is the only Bull to receive a Top-50 accolade, though it comes rather unconvincingly, with him ranked exactly at No. 5o. With Markkanen’s potential being a topic of conversation for many around the league, it’s not surprising to see him land right in the middle of the pack of the leagues top players. Injuries (and an overall rough team) have stunted his growth over the previous two years, but through it all, he’s shown enough signs that he can become a top-forward in the NBA.

But make no mistake, this is a really great showing. After falling to No. 75 on SI’s list, this feels like a much more realistic ranking for the big man, and also rather complimentary. If Markkanen can improve on his 18.7 points and 9.0 rebounds per game (he, realistically, could be averaging a double-double), he’ll get over the top-50 hump soon enough. And that’s awesome.

But while Markkanen made a pretty substantial jump from one list to the other, the difference between Porter and LaVine is even more glaring. The two practically switch spots after SI had LaVine ranked No. 90 and Porter ranked as the best Bulls player at No. 57.

After a breakout statistical season from LaVine, the 90th-overall ranking had to feel like a slap in the face. ESPN putting him at No. 55 alongside Brandon Ingram (No. 56) and Jaren Jackson Jr. (No. 54) feels considerably more reasonable. LaVine may have flourished on the offensive end, but those stats fall empty if your team isn’t winning, something those players ranked around him have in common.

Considering that the verdict is still out on whether LaVine can play “winning basketball” (let the record show, I think he can), he feels right where he should be. The more he can prove to be an all-around player, the higher his stock will climb.

As for Porter, he experiences a large fall from grace. Not only does he drop 33 spots from SI’s list to ESPN’s, but he also took a massive drop from last season’s ESPN ranking that had him as the No. 38(!) best player.

I’ll be the first to admit that ranking last season was probably too inflated, but Porter is certainly better than a 90th-overall designation. Previously, I expressed that Porter’s No. 57 ranking on the SI list felt more than acceptable, and I stand by that. After coming over from a poor situation in Washington, Porter is arguably presented with his best opportunity to break out since coming into the league. LaVine and Markkanen may be the team’s focus, but don’t be surprised if Porter plays an instrumental role on both sides of the court late in games this season.

Broadly speaking, nothing better exemplifies the current state of the Chicago Bulls than this dichotomy in rankings for LaVine and Porter. The most optimistic case for each is so high, but the most pessimistic is a fair shake lower. If the chips fall one way, it seems like the Bulls could have two Top-60 players (in addition to Markkanen), but if they fall the other way the season could swing wildly off the rails.

Moral of the story: Nobody knows how to rank these young Bulls players yet, so I guess we’ll just have to wait and see.