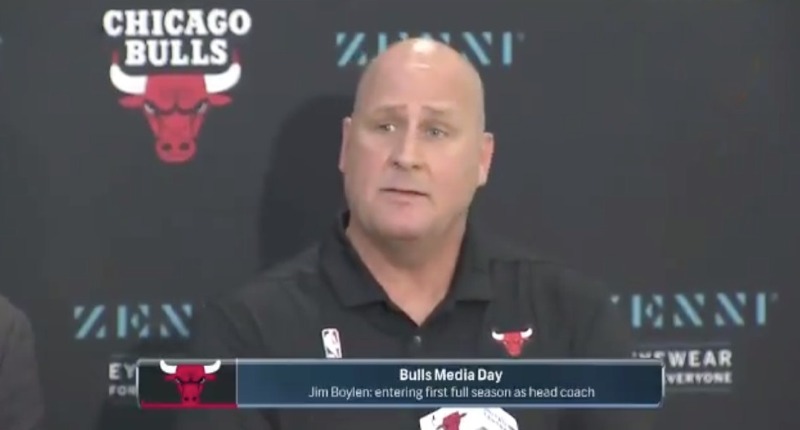 Hurry, raise the banner! Grab the champagne! The Chicago Bulls have finally done it!

During Monday’s Media Day, the Bulls went out of their way to make one thing clear: Playoff basketball should be back in Chicago.

I know it’s hard to believe, so check it out:

It's playoffs or bust for Boylen and the #Bulls.

Yup, that’s Jim Boylen awkwardly telling us that this team will be preparing every day like they’re a playoff team.

After the opening press conference finished up, John Paxson then joined the NBC Sports Chicago crew for an interview where he doubled-down on the playoff claim. Woah! Two times in one day!

While this all may sound like typical coach-speak, the fact that the organization started off this afternoon with a clear playoff agenda is pretty huge. Last season, the Bulls avoided any sort of conversation on the regular, basically telling the fans straight-up that it wasn’t on their minds.

It’s annoying that we have to look forward to something as simple as having playoff aspirations, but at least it’s a step in the right direction. And the same can be said in regards to the praise this past free agency/draft received.

Media Day is almost always a way for the team to throws us headfirst into amped up excitement before reality slaps us across the face a month later, but I’ll admit, something did feel different about this year’s event. The winning mentality radiated from each player’s mouth over the course of the afternoon. This was accompanied by an unusual sense of maturity. Everyone from Coby White to Thaddeus Young shared the same mindset.

LaVine says his goal is to “play all 82 games, plus the playoffs.” No one is shying away from talk of Bulls jumping from 22 wins to qualifying for the post-season.

"Playoffs is definitely an achievement that we want to Accomplish. That’s one of our team goals. We know it won’t be easy but we’ll take it one moment at a time." – Otto Porter Jr. #BullsMediaDay pic.twitter.com/4CfVOjCap9

“Having Zach, Lauri, Wendell – you want to see what they can do. I want to be a part of that: building a new culture, helping us win, get to the playoffs.” – Thad Young #BullsMediaDay pic.twitter.com/EJJrF6SN9g

We haven’t seen this “we mean business” mentality from the Bulls in quite some time, and if we have, it hasn’t felt genuine. Then, when you take into consideration that the entire team (minus FIBA participants Cristiano Felicio and Tomas Satoransky) has been in the Advocate Center together throughout September, you can see this isn’t all talk.