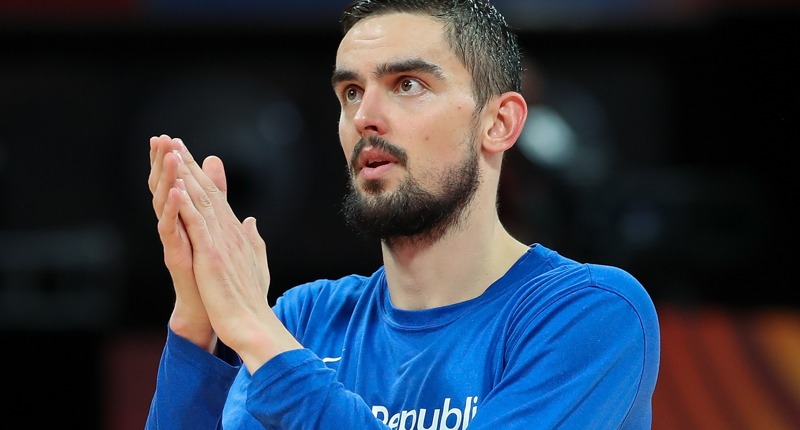 Free-agent signing Tomas Satoransky will get his first taste of starting minutes with the Chicago Bulls tonight against the New Orleans Pelicans.

Satoransky’s swap out with Kris Dunn is the only change to the starting lineup from the first game, with Zach LaVine, Otto Porter, Lauri Markkanen, and Cristiano Felicio all chalked in.

On Monday, when the Bulls battled the Milwaukee Bucks, the point guard competition remained a stalemate. Head coach Jim Boylen commented after the game that neither Dunn, Satoransky, or Coby White separated themselves from the pack. Although, when evaluating each performance, I’d argue Satoransky had the most balanced night.

Out of respect, many haven’t shied away from saying this is “Dunn’s spot to lose,” but after the Bulls handed over a $30 million contract over three-years to the 27-year-old point guard, I’d say it’s Satoransky’s job to lose now.

His remarkable play in the FIBA World Cup only raised the hype – he dished out 8.5 assists per game during the tournament; not to mention, he had one of the league’s best assist-to-turnover ratios last season with the Washington Wizards. It’s simple, the guy can lead an offense. Don’t overthink it.

Satoransky also happens to be the team’s best Swiss army knife, comfortably able to play off the ball at the one, two, or three. On Monday night, with the limited depth at small forward, and plenty of guards with which to work, Satoransky clocked his fair share of minutes at the three. He finished the game with an underwhelming performance shooting the ball (1-6), but he managed to make up for it with three assists, five steals, and seven rebounds.

“I’m still trying to adapt to the lineups and guys, but I think we’ve been playing very well with each other in practices.” – @satoransky, who will start tonight. pic.twitter.com/7AbKbD97yd

Now back to his natural position, it’s fair to predict his scoring and assist numbers will see a nice bump tonight. Known most for his playmaking ability, this will be an important opportunity to get the ball moving and showcase chemistry with Zach LaVine and Lauri Markkanen. Last season, the Bulls were 27th in the league in total assists, and guess where the Wizards were? 6th. By no means is that all Satoransky’s doing, but he certainly helps those numbers.

Possibly more important than Sato’s start though, Wendell Carter Jr. was upgraded to questionable this morning after participating in shoot-around. Jim Boylen did tell reporters the staff will “see how it goes before the game,” but that’s a positive sign, after this tailbone bruise started to appear a bigger deal than initially reported.

However, if Carter Jr. remains out, the Bulls are still in a position to get at least one piece of their front-court back (Luke Kornet, who was questionable yesterday, is now listed as probable).

As for Chandler Hutchison and Shaquille Harrison, they remain out.