REPORT: Bradley Beal Extends with the Wizards For Up To Four Years and Roughly $130 Million Skip to content 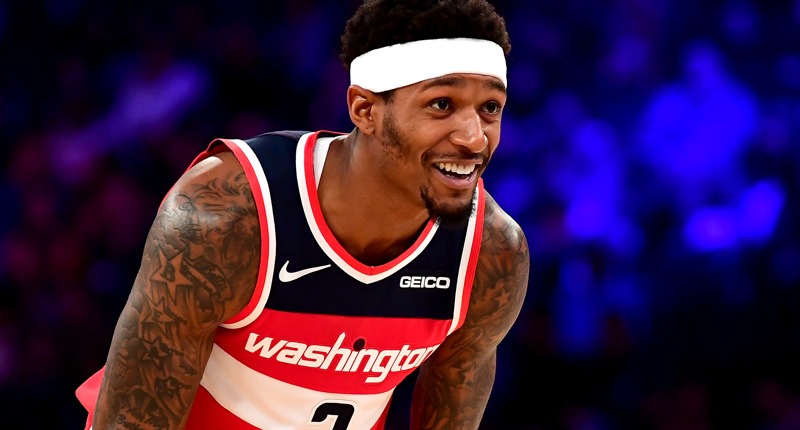 Woj, can’t you let me have my morning coffee before you start dropping bombs?

ESPN’s Adrian Wojnarowski shared some big news with the rest of the NBA this morning, announcing that the Wizards and Bradley Beal have agreed to a two-year $72 million contract extension.

The move comes as a small surprise for NBA franchises who were hoping to take advantage of Washington’s rebuilding years. While no rumors ever officially got off the ground, Beal was theoretically entering a contract year (player option for the 2020-21 season) and the idea of him entering the trade market made too much sense for both parties.

However, the word coming out of Washington was always that Beal and the Wizards remained committed to one another, and now we’re finally seeing that first hand.

According to the Washington Post’s Candace Buckner, Beal wants to go against the current NBA trend and wait things out in D.C.: “He wants to kind of choose his own path and not necessarily jump on someone else’s bandwagon but to be the reason Washington becomes a destination,” Beal’s Agent Mark Bartelstein said.

The Wizards have continued to sell Beal on a future vision, one that’s hard to imagine with a four-year $170 million contract tied up in the injury-plagued John Wall. The money added to Beal’s contract will only handcuff this team further, but props to Beal for grabbing the bag while he can.

Previously, Beal was looking at a 2019-20 season that would net him roughly $27 million with a player option in 2020-21 worth approximately 28.7 million. The extension means Beal has already picked up his 2020-21 option and added, according to ESPN, $34.5 million in 2021-22 and a new player option for 2022-23 worth 37.3 million. Combined, if he picked up his player option during the final season, the superstar is guaranteed right around $130 million. Yeah, so that might also be a good reason to accept the deal.

The Wizards now have $79 million tied up in Beal and Wall during the 2021-22 season, making them the third-highest paid NBA “duo.”

Ew. Can you believe that?

Anyway, if Beal decides to decline his player option for 2022-23, he’ll be available for the league’s supermax deal which, based on Wojnarowski’s projection, could net the highest NBA contract ever at five-years $266 million. Although, don’t hang your hat on that number because it’s several years down the road and completely dependent on the cap going up.

According to CBS Sports, Beal’s extension also includes a 15 percent trade kicker. If the Wizards still choose to deal him past this season, it’ll cost them a chunk of change. Regardless, no one is ever really safe. Remember when the Clippers handed Blake Griffin a five-year deal before sending him out the door to the Detroit Pistons? Wild.

For now, the Bulls remain safe from any other Eastern Conference team’s getting their hands on Beal, it’s hard to imagine the Miami Heat wouldn’t try to be all over it with Jimmy Butler now on the roster. In addition, we avoid the Western Conference becoming EVEN MORE stacked, so I guess that’s good.

In the end, good for Beal … but I’m bummed he won’t be on a better squad.