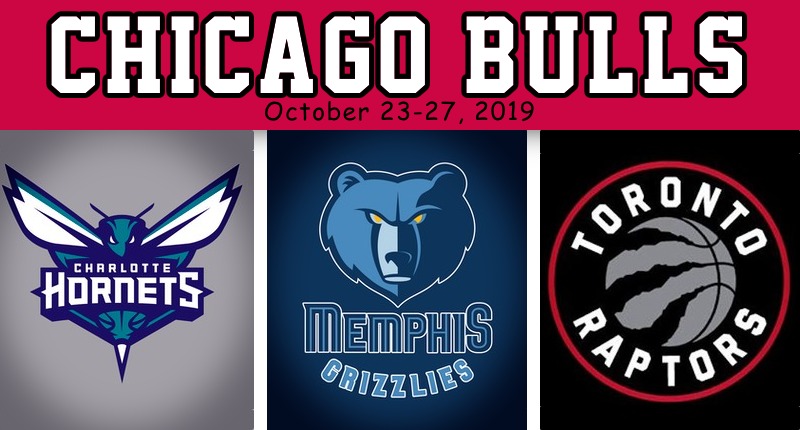 The Chicago Bulls are back to make us fall reluctantly in love with them all over again!

The first week of Bulls action will begin on the road with matchups against two of the worst-ranked teams in the league before battling the defending NBA champs at the United Center. Despite two “easy” games to start, these first two contests will be a strong test for Jim Boylen and his coaching staff to see if they can take care of weaker opponents.

Time to start things off on a high note!

Additional Roster Notes: Jim Boylen and Otto Porter discussed load management earlier this week. Back-to-back games will be dealt with on a case-by-case situation, so the Bulls might do some adjusting with Porter’s minutes with the Grizzlies and Raptors games on Friday and Saturday.

Unavailable/Injured: As of now, no players across the three teams should officially be out.

Additional Roster Notes: Andre Iguodala is technically on the Grizzlies roster, but remember: the guy will not be playing while the team tries to find him a trade. The Toronto Raptors Rondae Hollis-Jefferson and Patrick McCaw will both be out against the New Orleans Pelicans, but the injuries are day-to-day, so they could very well be back by Saturday’s matchup against the Bulls.

Bulls Player: All eyes should be on Lauri Markkanen this week. He has an extremely favorable matchup against a weak Hornets front-court, and it’ll be a great opportunity to get into a groove. Markkanen’s preseason performance wasn’t bad, but it certainly was underwhelming. The Finnisher didn’t feel like a major part of the Bulls gameplan, and he continued to reside in the corner and wait for his classic three-pointer. He finished things off with a performance against the Atlanta Hawks where he had only four points in 23 minutes with one free throw attempt. The Bulls need more.

Hornets Player: I guess it has to be Terry Rozier? The Bulls have an abundance of guards on their roster, but none have displayed the quick feet defensively that it will take to slow down Rozier. Tomas Satoransky has the size to give him problems, but staying in front of Rozier will be its own battle. Funny enough, Dunn is probably your best option, which could be why we see him quicker and more frequently throughout the game. Regardless, the Bulls might be content with letting Rozier get buckets if he’s the only player they have to worry about.

Grizzlies Player: Picking Jaren Jackson Jr. or Ja Morant feels like the obvious (and right) choice, but in the spirit of the World Series, let’s just throw a curveball into this! All of that draft-hype about Brandon Clarke might have been legit. The former Gonzaga star only played two games against NBA-level players this preseason, but he had a double-double in both games. The Bulls front-court should give him trouble, but this is also a team that finished 25th in rebounding last season. The Bulls were a lot better rebounding the basketball in the preseason, finishing 5th in rebounds per game … but guess who was first? Memphis.

Raptors Player: Okay, now I’ll go the obvious route: Pascal Siakam. Last year’s Most Improved Player, Siakam looks like he’s going to be the league’s next superstar. Money talks, and the Raptors recently awarded Siakam a four-year, $130 million contract. Siakam has the talent to give nearly any team in the league problems. He’s long, athletic, crafty, smooth … basically all the positive basketball adjectives can be applied here. The Bulls have enough size to keep throwing guys at Siakam, but someone will have to step up defensively to get the job done.