The Bulls Aggressive Defensive Strategy Is a Work in Progress, But They Should Stick With It (For Now) Skip to content 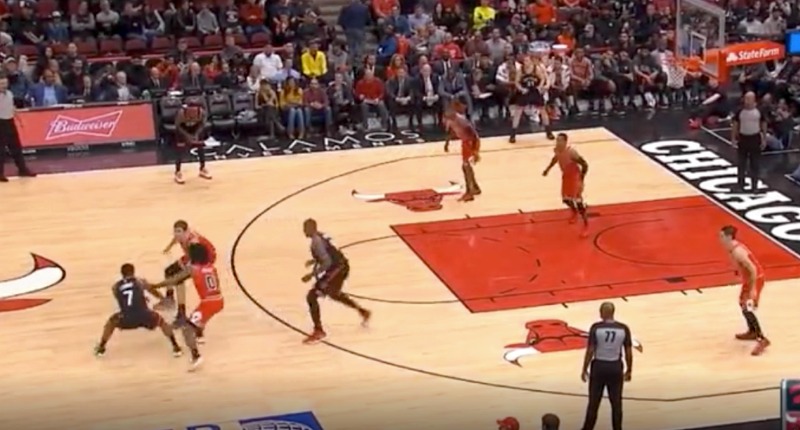 The Athletic’s Stephen Noh did an extremely thorough breakdown of the Bulls pick-and-roll defense earlier today, and I HIGHLY recommend checking it out.

Noh describes in great detail Jim Boylen’s heavy use of a blitz pick-and-roll. In short, the defensive strategy is when both defenders attack the ballhandler once a pick is set. When done correctly, the opponent is basically forced to pass, ideally leading to a sloppy pass/possession, a poor shot attempt, or, of course, an immediate turnover. Now, when the Bulls do “blitz” with two defenders, that leaves the remaining three players to cover the other four guys … and that’s been the area the Bulls can’t seem to get right.

For more of the nitty-gritty (with video examples!) on how the Bulls have done this both successfully and incorrectly, please check out Noh’s full piece right here.

The real question I want to focus on today is whether this is the right approach.

On the one hand, you could turn to the Bulls 107 defensive rating this season and pretty easily say no. But that’s actually in the middle of the pack ranking 18th in the NBA … which is still better than last year’s 5th-worst rating of 112.8. Not to mention, the Bulls currently hold a 16.6 opponent turnover percentage, which is 3rd in the league (and at least partly the point of the aggressive play).

Yes, through four games, you never want to take too much away from the stat sheet (after all, Lauri Markkanen is shooting 13.3 percent), but considering the goal of this aggressive pick-in-roll is to create turnovers, it’s fair to recognize it’s doing just that.

FWIW: You can even see positives on an individual basis here, where Lauri Markkanen and Tomas Satoransky are in the top-10 in forced turnovers thus far.

Beverley leads the league with 13 forced turnovers. Thybulle in 2nd with 12. And considering Thybulle has played just 66 mins, he's averaging 6.5 forced turnovers per 36 mins (vs. 4.4 steals/36). This is some of the new data the NBA has started tracking on the hustle stats page. pic.twitter.com/btvraMfu42

And, theoretically, more turnovers lead to more fast-break points, and the Bulls are currently 8th in the league in that category, as well.

When the Bulls blitz pick-and-roll defense works … it really works. Although, as Noh outlines, it isn’t an easy strategy to master, especially for a young team. All of these stats sound great, but the Bulls are still losing games, and it’s still mainly because of poor defense.

The reason you’ve (probably) seen so much talk about “rotating” and “closing out” is because that’s exactly what this defensive strategy calls for. And the Bulls continue to fail at it.

On 39 of the Hornets' 44 3-pointers last night, the Bulls' closest defender was at least 4 feet away (the NBA considers that "open"). They shot 51% on those attempts.

20 of those were "wide open," meaning the closest defender was 6+ feet away.

When the two Bulls defenders attack the ballhandler, the three other players must ensure they’re in the right spot with eyes on the ball AND the open man. While this blitz pick-and-roll means players will be open, it can work well if the Bulls simply rotate, and closeout … something they obviously haven’t learned to do yet.

Noh does write the Bulls are “somewhat unique” in how heavily this strategy is used, but it’s hard to argue with it being a bad choice because of how well it fits the players.

Theoretically, they have decent personnel for what they’re doing given the length and athleticism up and down their roster. But with the third-youngest team in the league and a bunch of new players who haven’t played much together, it’s no surprise that this demanding defense hasn’t clicked perfectly so far.

All right, so is sticking with it after the mess we’ve seen still worth a shot?

The Bulls have shown this defense can work in spurts, and the turnover margin, for now, is a strong positive. Although, the leash can’t be too long. We’ve seen subtle improvement over these past couple games, but if the players can’t lock it down (especially Markkanen and LaVine), the time will come where Boylen must change the gameplan.

We’re only four games in, and I’m willing to give this aggressive strategy a shot for around (at least) 20 games. If the players can settle in, and the Bulls could find their niche, I can’t see why this wouldn’t help them turn into a half-decent defensive team.