Rose Returns to Chicago for the Third Time as an Opponent ... So There's Hype (And Fun!) to be Had Skip to content 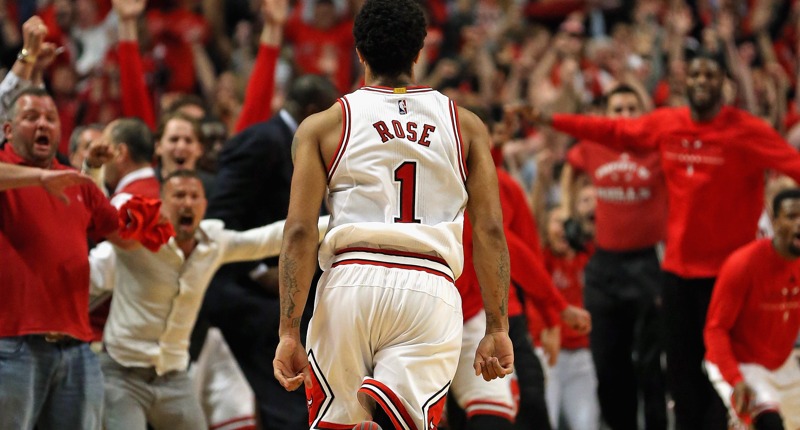 Every Rose has its thorn.

How many times do you think Chicago beat reporters have used that lede over the years? Do you think it’s Over/Under the Bulls current rebounding differential??

Anyway, Derrick Rose returns to the United Center for only the third time as an opponent tonight. The feels are real.

Rose, now a member of the Detroit Pistons, is arguably looking better than he has since leaving Chicago in 2016. Earning himself a fresh contract after a bounce-back season with the Minnesota Timberwolves, Rose is a man rejuvenated.

Through his first five games with the Pistons, the former-MVP is averaging 20.4 points with 6.2 rebounds per game off the bench. He dropped an incredibly impressive 31 points in the team’s close loss to the Philadelphia 76ers, shooting 66.7 percent from the field. On the season as a whole, he’s got a 55.3 percent clip. Talk about a hot start.

He’s bound to come back down to earth eventually, but coming off the bench, it’s safe to say the Bulls backcourt will have their hands full tonight.

Rose’s revamped success might be just as much a part of a newfound mindset as it is about staying healthy. NBC Sports Chicago’s K.C. Johnson talked with Rose ahead of tonight’s matchup, and he sure does seem to be in a good place:

“Man, I’m just happy to be here,” Rose told Johnson. “The spot I was in mentally a couple years ago, I’m just happy I weaved through it, got through it somehow and some way with my family and friends that were around me. I’m just grateful. And like Isiah (Thomas) said, I’m just trying to cherish these moments.”

It’s hard not to be sentimental when the Chi-town native steps back into the Windy City. His time with the Bulls provided a fresh, new brand of basketball the city was longing for since the departure of the GOAT. And if you’re looking to express that sentiment, then there’s no better way than with James L. Edwards III latest article for The Athletic.

Rose sits down to review some of his most iconic Bulls highlights, and it’s definitely worth the read if you want to relive the glory days. Rose gives his thoughts on everything from his iconic buzzer-beater against the Cavaliers to the Joakim Noah jump-pass he did against his future team.

And, interestingly enough, Rose might want to relive those days too. Ever since he was traded away from the organization, the media hasn’t been shy about asking him if he’d ever like a reunion with the team that drafted him No. 1-overall.

In a media scrum after the Pistons morning shoot-around, the question was posed again to Rose. Ultimately, he said putting back on the Bulls jersey before he heads out of the NBA is up to the front office: “You’ll have to ask Jerry [Reinsdorf] about that,” Rose laughed. “That’s all out of my hands, bro.”

Derrick Rose open to being a Chicago Bull again. pic.twitter.com/BJ5TmEYQBR

A similar hot topic since Rose left Chicago: jersey retirement. The video shared above be Fansided’s Mark Carman begins with Rose talking about having his name up in the rafters. “I mean it’s not up to me to determine that, it’s up to the front office and Jerry and them to do that,” Rose said. “I mean, I’m from here. Who wouldn’t want their jerseys up [with] Mike and everybody up there? But it’s not up to me to decide that.”

Well, if you’re even the slightest bit curious about what it would look like, the Bulls Talk Twitter account gave us a look this morning (as well as their opinion on the matter).

Nothing gets Chicago Sports fans riled up like some good D-Rose debates!

While it’ll be weird to see Rose repping a Pistons jersey on the United Center court tonight, having the Bulls-great back in Chicago is always a welcomed sight. At the end of the day, I’d love nothing more than to see him go off tonight, and I’m sure many of the fans in attendance will feel the same way … as long as the Pistons lose.