Zach LaVine Isn't Very Happy About Last Night's Loss ... Or The Start of the Season (VIDEO) Skip to content 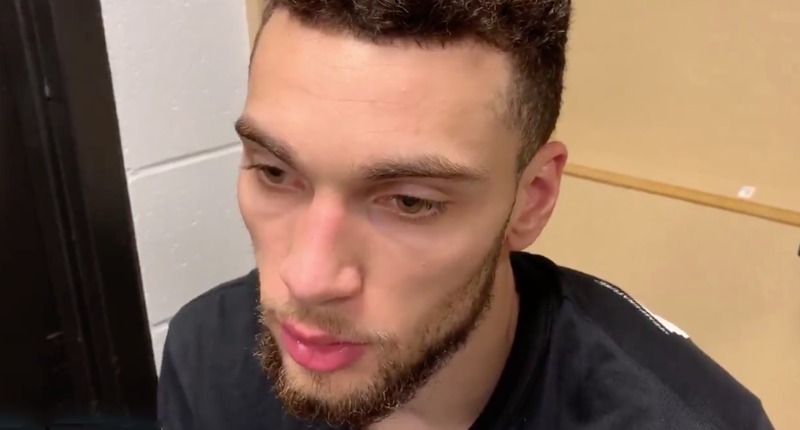 Zach LaVine clearly took a page out of the Thaddeus Young handbook.

After last night’s 108-95 loss to the Indiana Pacers (who were missing Domantas Sabonis and Myles Turner, I might add), LaVine expressed his clear frustration with the Bulls horrid start to the season.

Check out what he told NBC Sports Chicago’s K.C. Johnson:

Zach LaVine on the loss: pic.twitter.com/tQhxUlqSKZ

All things considered, LaVine has had a fine start, himself. He hasn’t come out of the gate with the immediate firepower some expected, but he’s slowly getting back in a groove with 20+ points scored in three of his past four games, and an average of 26.4 points per game over his past five.

The question for LaVine this season, though, was could the statistical production translate into the win column … and so far the answer is no.

Of course, I won’t put this entirely on LaVine’s shoulders. While he’s made his fair share of rough crunch-time plays, he’s also had big three-pointers to keep the Bulls alive against the New York Knicks and Detroit Pistons. If anything, Lauri Markkanen has been the team’s bigger disappointment, but that’s beside the point for now.

Indeed, LaVine’s decent performances have probably added to the frustration we heard last night. A frustration that stretches from execution to chemistry.

“S***, I gotta learn it too,” LaVine said. “It’s tough. Like I said to you before, we’ve gotta win games that we’re supposed to win. They have three of their starters out. They came in and played harder than us and kicked our ass. It’s simple. We’re just not there yet.”

The Bulls aren’t there yet, and the scariest thing is, I’m not quite sure how they’re going to get there. A more consistent overall effort is certainly needed, but that’s hard to combat when the players have a hard time pinpointing why that’s a problem in the first place: “We have really good spurts and then we get lost, and I don’t know what the hell goes on,” LaVine said. “We’ve got to clean it up.”

Ultimately, it’s up to the coaching staff to figure out what’s plaguing a team worst. Jim Boylen did mess with his rotations a tad last night, rearranging Young and Markkanen a bit. However, the overall adjustment to any kind of game plan or scheme hasn’t yet taken place (and that’s the biggest change a team can make).

From any outside perspective, last night screamed dominance in the paint (tied 52-52). With the absence of both Pacers’ starters in the frontcourt, attacking the rim and getting to the free throw line (went 14-25) should have been at the top of the to-do list. Instead, the team continued to run their offense along the perimeter and hiked up nine 1st quarter three-point attempts.

LaVine brought up all the new faces on the Bulls roster, as well as the new offense/defense. And that isn’t wrong, but even LaVine conceded that it’s the “same excuse everybody else has.” Who knows … perhaps calling out the excuses is the first step in not needing them.

Anyway, this whole post is just a long-winded (half-rant driven) way of saying “at least LaVine is showing he has a chip on his shoulder.”

I don’t mind seeing any of these players express frustration because (while cliche) it does show they care. However, LaVine and Co. have to respond with their play now, not words or body language (LaVine was taken out briefly last night by Boylen because he was noticeably frustrated while in the game). At the end of the day, I wanted to see a little bit more of an edge from LaVine when it came to leading this team, so maybe this is finally that.

Although, the only thing I know for a fact is this schedule for the Bulls is about to get a whole lot harder. While it might be an 82 game season, the Bulls easiest stretch of the year has already passed.