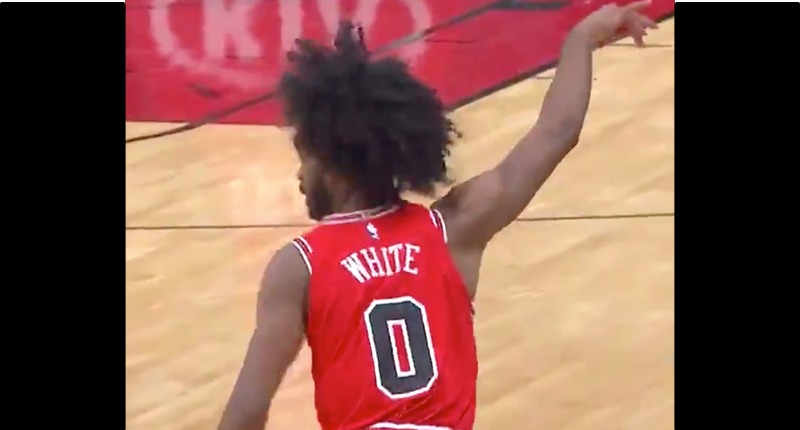 White was absolutely unconscious in the fourth quarter of Tuesday night’s game at the United Center, breaking a franchise record by knocking down SEVEN(!) three-pointers in one quarter. Even crazier, he hit five of them in a row! Even crazier than that, he’s the youngest player EVER to hit seven three-pointers in a single-game. Dude. Yes.

He has SIX threes in the 4th quarter alone.

COBY. 7TH 3 OF THE QUARTER. pic.twitter.com/L0HueE5zxG

Heading into the game, White was shooting only 21.2 percent from downtown. But now? I think it’s safe to say he’s a lot better than that.

White finished with 27 points off the bench, shooting 7-11 from downtown, and fittingly finished with a +27 on the night. He scored 23 of his total points in the final quarter. Absurd (we’ll have more on his night later/tomorrow).

The Bulls were in a tight matchup with the New York Knicks heading into the 4th quarter after former-Bull Bobby Portis sank a game-tying three-pointer at the third-quarter buzzer. Once again, dropping a winnable game in the final frame was on the horizon.

Chicago grabbed their fourth win of the season, beating the Knicks 120-102. And even before White, the Bulls shots were falling at a better rate. The team shot 50.6 percent from the field and 42.4 percent from behind the arc. Obviously, White ended up as the team’s leading scorer, but LaVine wasn’t far behind with 25 points and five assists of his own.

At the end of the day, THIS was the game the Bulls needed. Forget about how “easy” the opponent may be, the Bulls needed a satisfying fourth-quarter finish, and that’s exactly what they got.