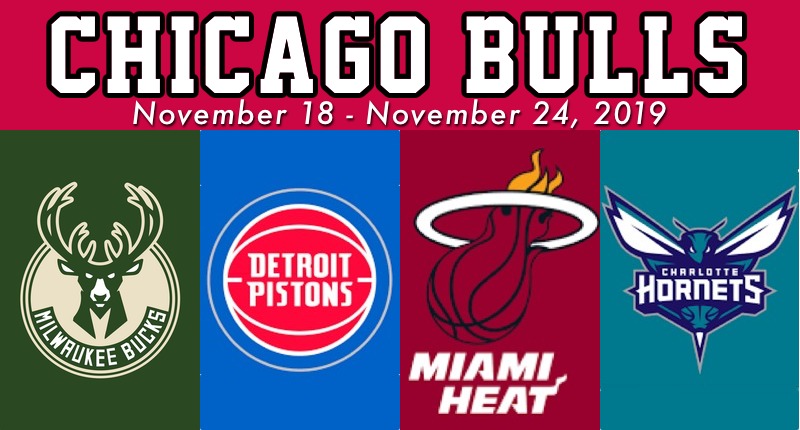 How do I feel about a new week of Bulls basketball?

Another Monday means another fresh opportunity for the Bulls to turn things around! LET'S GOOOOO!

Additional Roster Notes: The Bulls announced Monday morning that stretch-big Luke Kornet will miss time after undergoing a procedure to repair a sinus obstruction. You can read more about it here:

Bulls Players: You’re up again, Tomas Satoransky. We all saw a brief spurt of what Satoransky’s capable of in his career-high, 27-point performance against the Atlanta Hawks. He was knocking down three-pointers, aggressively attacking the basket, and dishing out assists along the way. Since then, he’s resorted back to his (mostly) underwhelming play. He’s going to be tasked with several tougher matchups this week, and it’s time for him to step-up.

He’s been shooting the ball well thus far, but he also hasn’t been taking enough shots. He and Jim Boylen know it. Let’s see if they change it.

Bucks Player: All right, Giannis Antetokounmpo is someone you should keep an eye out for, but Eric Bledsoe dominated the Bulls last week, as well. The veteran point guard dropped a season-high 31 points on 12-14(!) shooting. He also dished out eight assists and recorded the team’s second-best plus-minus at +9. The Bulls had no answer for him defensively and he easily won his matchup against Satoransky. Bledsoe can get in one heck of a rhythm when he’s able to power his way to the hoop, so if the Bulls want a real chance at beating this Bucks team, they’re going to have to force him to shoot. Good luck, Sato.

Pistons Player: Blake Griffin is yet to have his “I’m back!” game this season, which means it’s obviously coming against the Bulls this week. Griffin hasn’t connected on his three-ball this season, shooting 2-11 over his first two games, but considering how Chicago tends to leave guys open behind the arc, he could heat up. While I trust Wendell Carter Jr. to protect the rim well, he’ll already have his hands full with Andre Drummond. Do we trust Lauri Markkanen to give Griffin a hard time? No. The answer is no. We might be seeing a lot of Thaddeus Young in this game.

Heat Player: Finally in a situation where it’s “his team,” the former-Bull will be looking to put on a show. Think about this game as Butler’s high school reunion … and Chicago is his teenage sweetheart who dumped him for the foreign exchange student with a cool nickname. Be afraid. Be very afraid.

Hornets Player: The Hornets are letting Devonte’ Graham run wild, and it’s working. The second-year guard is posting an impressive 18.8 points per game and averaging 7.1 assists. The guy is shooting above 40 percent from the field and behind the arc. In his performance against the New York Knicks on Saturday, he hit nine three-pointers. If the Bulls want to avoid a second loss to the Hornets, stopping Graham is on the top of the to-do list.