Despite Even Tougher Competition, the Bulls Defense Seems To Be Improving Skip to content 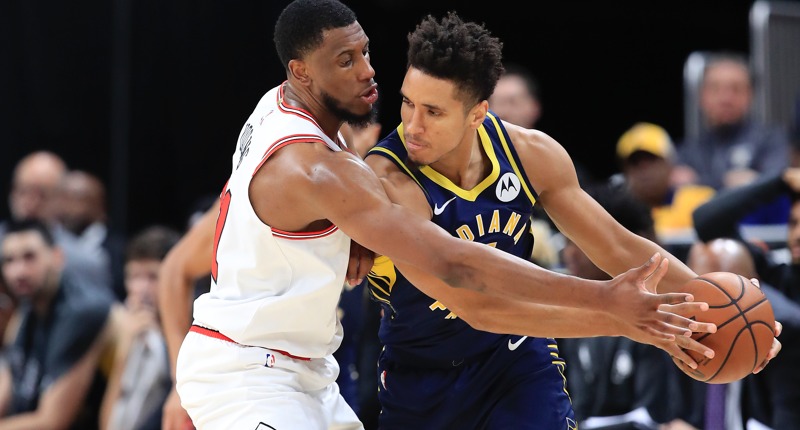 Coming into the season, the Bulls defense appeared to be the team’s obvious weakness, and several games in (surprise!) it was their greatest liability.

The Bulls left players wide-open behind the arc, failed to rotate, and weren’t even trying to close out. Put simply, the group looked lost.

Stephen Noh of The Athletic wrote a great piece on the team’s defensive strategy, which relies heavily on aggressive blitz pick-and-roll coverage, and why it wasn’t working. In short: while the game-plan drew turnovers at an exceptionally high rate (indeed, it’s the main purpose of the attack), the Bulls were still failing to stop the bottom-feeders of the NBA.

From there, the question became if any benefits of the complicated scheme were worth the cost? I answered yes at the time, adding that despite the frustration, we simply needed a greater sample size to make the proper determination.

And whaddaya know: The Bulls are 15 games into the season, and we’ve finally seen some noticeable improvement on the defensive end of the court. The sample still isn’t huge, but we’re trending in the right direction.

Hello! The Bulls have seen pretty significant improvement from one segment of the season to the next. Factor in that the schedule has been significantly harder on the back end, and those numbers look even more promising.

With the aggressive approach they deploy on defense, I tried not to put too much weight on the turnover numbers early on. However, ranking first in the league in steals and opponents turnovers per game is certainly notable. And at a minimum, that suggests the strategy is at least doing what it’s meant to do. Meanwhile, the current first-place position in points off turnovers proves that they’re actually capitalizing on the effect.

Now with that said, the change in production could be due to multiple factors. For one example, Jim Boylen has tweaked the rotation slightly, removing Luke Kornet (who appeared to be a defensive liability) and relying even more on Wendell Carter Jr.

And while it’s always hard to attribute team success to an individual player, Kris Dunn’s efforts with the second team certainly play a role. He’s currently the NBA steals leaders and he’s anchoring a bench mob that’s been surprisingly efficient on both ends of the floor.

But overall, I think this might just be the players finally finding their footing. Of course, what’s really annoying – as anyone looking at the standings can attest – is that none of it matters if the team can’t score a darn bucket.

Pull up the team’s offensive rating from the first seven games compared to the next eight and it dropped from an already non-impressive 18th-overall to … dead last in the NBA. Oof.

Even in the team’s 20-point win against the Detroit Pistons, they scored only 109 points. In today’s NBA, that’s just not a whole lot.

I’m not saying this team has it figured out on the defensive end. Indeed, we’ve already seen how terrible they can be during certain stretches, especially in close games. Not to mention, the eye-test reminds us that some teams have just played poorly against the Bulls (the Pistons shot 24 percent from downtown, and that’s some luck going the Bulls way). But the greater point here is that maybe … JUST MAYBE … if the Bulls can figure out their horrid offense, they’ll have a shot at becoming a more consistently competitive team. Fingers crossed.