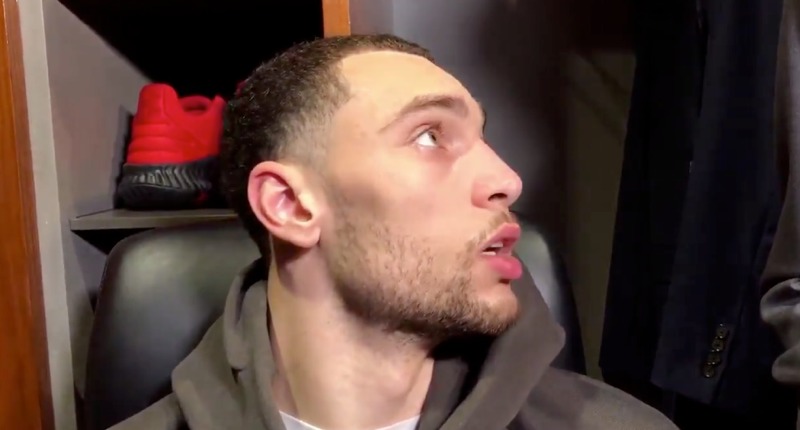 After the Bulls 116-108 loss to the Miami Heat Friday night, Zach LaVine sounded off on his head coach, but not without reason. A little over three minutes into the first quarter, Jim Boylen pulled Zach LaVine out of the game for what he referred to in the postgame as “three egregious defensive mistakes.”

And here’s what LaVine had to say on the matter, once he was told what his coach said:

Zach Lavine doesn’t agree with Jim Boylen’s assessment of why he was the only person that got pulled #Bulls #NBATwitter #BullsNation pic.twitter.com/tHyAg80eQW

For reference, The Athletic’s Stephen Noh tried to find the three plays to which Boylen was referring, and shared these clips on Twitter:

Pretty sure these are the three defensive plays that Boylen was criticizing LaVine for postgame. They happened on three consecutive possessions. Boylen called a timeout after the last one and pulled LaVine out of the game after only 3:27 of 1Q playing time. pic.twitter.com/8LwHhoIPvm

The hustle is definitely lacking on LaVine’s part.

Is it possible to be on neither LaVine or Boylen’s side in this argument though? On one end, LaVine has continued his reputation of poor defense to start this season, and he’s certainly costing the Bulls some easy buckets whenever he’s on the floor. Not to mention the fact that his offensive production isn’t even coming close to outweighing his defensive struggles at the moment. On the other, Boylen continues to make questionable in-game decisions … he also flat-out lied.

Missed a little part at the end of the other one above. This one includes it. pic.twitter.com/UwdeDi5SnB

Only a few games ago he talked about not “yanking guys,” yet he did exactly that to LaVine.

We’re only 16 games into the season, but things sure do feel like they’re falling apart in the Bulls locker room. I guess only time will tell if this is a one night gripe or a longstanding issue. Of course, with another game tomorrow night, there’s not that much time to pull things together. That could be one awkward plane ride.