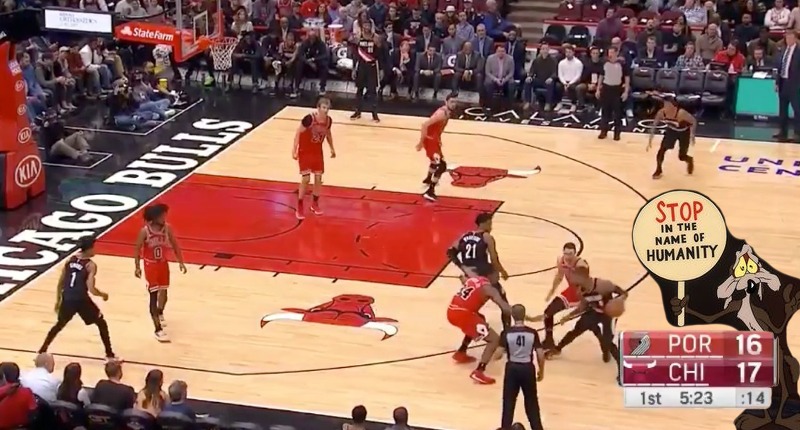 In October, we shared a piece from The Athletic outlining the Bulls aggressive defensive strategy here in 2019, adding that even in light of some initial concerns, I’d wait a little longer before making a change.

Well, despite enjoying some early-season success since then (Chicago is forcing the most steals per game in the NBA and their defense is ranked 14th overall), I think it’s about time to go in a different direction. The Bulls simply haven’t proven to be a winning team with this system in place and last night’s performance against the Portland Trail Blazers reinforced that position.

For example, this thread explains how the Blazers completely exploited the Bulls blitz coverage last night – which, again, we know has some strengths – and I recommend checking it out.

1/5 PnR calls for Wendell Carter to show high. Lauri Markannen drops to "tag" Hassan Whiteside the roll. Tomas Satoransky is *supposed* to split the difference – play in between CJ McCollum and Melo.

Indeed, when you consider that this defense almost inherently creates open looks for the Bulls opponents, the system, itself, feels flawed. But the bigger issue here is that Boylen continues to rely on it, even though the Bulls players simply can’t run it.

For the second-youngest team in the NBA, this is a rather complex defensive scheme to pick up over one offseason. The Bulls are relying on key rotations or closeouts from guys like Coby White and Zach LaVine – a rookie … and a notoriously poor defender. In this scheme, the Bulls are always leaving a man open, and even if a Bulls’ defender can rotate on that man properly, it’s easy enough for a team like the Trail Blazers to adjust to ensure that open man is a playmaker.

Very smart halftime adjustment by Stotts against Bulls blitzing defense. Whiteside doesn't have good ball skills in the short roll, so he's having his guards set screens higher up instead of Whiteside setting them. Gives better playmakers the ball with more room to operate. pic.twitter.com/yTBRv0iHhn

Also, forget the half-court defense for a second, how does this happen?

Embarrassingly bad transition defense by the Bulls, off a made basket too. All five guys walked back. pic.twitter.com/OiQX8SnyRJ

This personnel isn’t going to be able to establish a consistent presence on the defensive end in this system, especially if they don’t believe in it. The Score’s Cody Westerlund spoke with Zach LaVine and Wendell Carter Jr. about the give-and-take nature of the Bulls defensive scheme, and the quotes he shared made it hard to read how confident these players are in their game plan.

“We’re always in rotations,” LaVine told Westerlund. “That’s our defensive scheme. I think we just got to play it. We’re the players out there. We got to do what our scheme is in practice and what we practice. We’re doing it to the best of our abilities. We just got to get it done.”

Read that quote as you will, but to me, that doesn’t sound like a player who fully believes in his coach’s system. LaVine sounds like he’s just doing what he’s told. Not to mention, if these guys believe they’re doing it to the best of their abilities, and this is the outcome, then that probably signifies a time for change.

With that said, we all know LaVine isn’t the biggest fan of playing defense to begin with, so maybe you don’t entirely buy his position. But these comments are being reciprocated by -arguably – the team’s best defensive player, Wendell Carter Jr.

“It gets kind of tough,” Carter said. “It’s just something I need to get used to, learn to work out of it. It’s our defensive coverage. I’m not asking anyone to change it. You just got to find a way to work it out.”

I bet he wouldn’t mind if someone did change it though. Anyway, I encourage you to go read Westerlund’s full post for more – check it out.

Only five days ago I wrote about the possible improvement we’ve seen on the defensive end so far. And while I’ll always think some of those numbers are encouraging (I was also so young and naive back then, duh), I now think those stats could be even more encouraging with a change of pace. This team has the length, size, and talent to play successful basketball on the defensive end, they just have to find the right system.