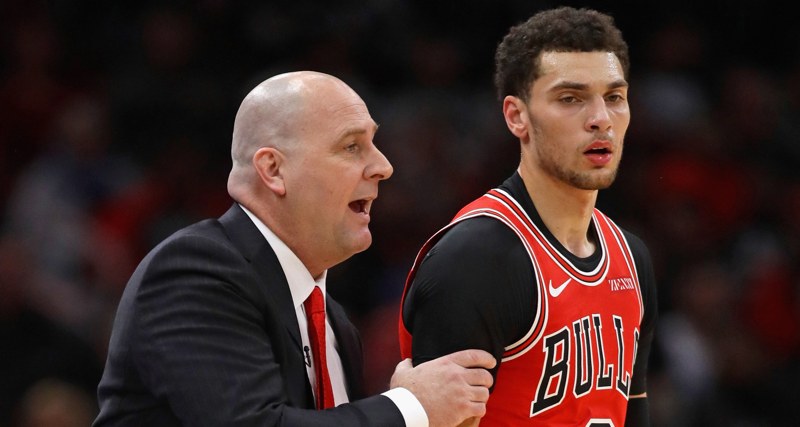 Call it tough love or call it revenge, whatever it is, Zach LaVine has responded to being benched in a big way.

On November 22, LaVine and Head Coach Jim Boylen had a very public disagreement that left the player feeling unfairly singled out after being benched. But in the Bulls’ five games since the spat, LaVine has averaged 31.8 points per game, shooting 50 percent from the field, and a staggering 57.1 percent from 3-point range.

To further drive home how impressive LaVine has been, here’s a look at his stats game-by-game:

LaVine’s averages listed above are a bit inflated by his “Take that, Boylen!” game against Charlotte, where he became just the third NBA player ever to hit 13 3-pointers (including the game-winner) in a single game. Eliminate that performance, and you’re still dealing with a nice four-game stretch where LaVine is averaging 27.5 points per game. Further, the last three games mark only the second time in his career that LaVine has scored 28+ points in three-straight games.

But still … I come back to LaVine having held up his fair share of the unspoken challenge to perform better since being benched by Boylen. On the other hand, Boylen has done anything but. While the poor decision-making and lackluster play from LaVine has subsided during this stretch of excellent play, the questionable substitutions and in-game management from Boylen remain.

In many ways, we can point to this as yet another example of LaVine not being a “winning player.” However, in my opinion, these past five games have felt plenty different from previous LaVine stretches. While the Bulls continued to fall to, so-called, weaker opponents, LaVine has arguably looked like the only “winning player” on the floor in four of these games. He has continued to be the life-saver trying to keep his team afloat, at least until when the rescue crew arrived last night.

If LaVine is to have the All-Star campaign many thought he was capable of, a lot still has to go right — including the Bulls, you know, winning games.

LaVine is slowly doing his best to prove he is not the problem. Instead, his play on the court is going a long way to show that it’s the guy who benched him that’s the real problem. Going as far as taking matters into his own hands to adjust a small part of the Bulls offensive plans to get Lauri Markkanen back on track. And it worked!

We’re not only watching a better LaVine as of late, but we’re also watching a fed-up player.

Good. Stay angry! It should be easy so long as Boylen stays at the helm.