Jim Boylen Remains Popular with John Paxson, Unpopular with the Players, Everything is Normal Skip to content 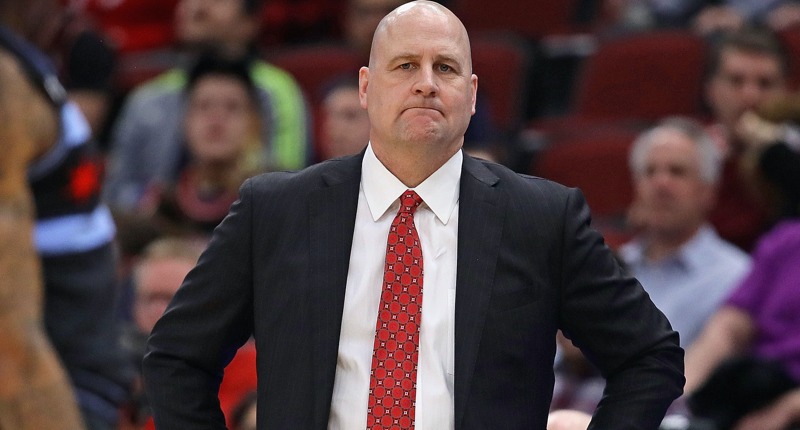 According to The Athletic, the Chicago Bulls are standing on two different sides of the Jim Boylen Gymnasium.

On one end, John Paxson and the Bulls front office stand snickering. On the other, the Bulls players sit whispering secrets to one another. But unlike an awkward middle school dance, I don’t think we’re about to see Zach LaVine and Paxson meet in the middle to jump-start an all-inclusive dance party.

To be fair, no other specific names were mentioned in the article when referencing support for Boylen. However, if Paxson rules over this front office with an iron fist, and it has certainly felt that way for quite some time, not many other opinions matter.

Especially not the player’s opinion, right?

“Sources say Boylen remains unpopular in the Chicago locker room, which isn’t surprising given that his tenure began with a near-mutiny over his grueling practices and formation of the much-derided “Leadership Committee.” His unpopularity with the players would be the driving force behind any move by management, who otherwise seem satisfied and gave him an extension before the season.”

As The Athletic wisely points out, none of this is jaw-dropping information. Jim Boylen got off to one of the worst possible starts with his new players a little over one year ago, and despite a brief honeymoon phase during the offseason, the team appears right back to square one.

With each and every loss, we’ve seen this locker room drift further and further away from their head coach. Whether Zach LaVine is taking matters into his owns hands, Wendell Carter Jr. is debating the Bulls gameplan, or the team is just flat-out not listening to Boylen mid-game, it’s becoming increasingly evident – at least, from an outside perspective – that these players are struggling to buy-in to their head coach.

Maybe it’s possible they feel just as lied to as we do. Paxson and Boylen put their own team on notice, setting the playoffs as a clear goal on Media Day. It’s never bad to want to win. It is bad when that’s blatantly not happening … or even the priority.

This is moving the goalposts. Boylen and Pax stood at the podium day 1 of the season and told fans that playoffs were the goal. They set winning as their measuring stick, can't change it now that they're losing. pic.twitter.com/3FNOGL7NNa

After last night’s game, Boylen claimed winning as important, and immediately you could hear the “but” coming. He continues to preach development like this is year-one of the Bulls’ rebuild. I give props to all the reporters who now press him on these statements, practically letting him in on the fact that he can’t do both. Boylen may tell folks it’s a juggling act, but it’s not one I want to watch.

The Bulls are reaching a stark dichotomy, so the question now is how will the handle it?

Our first reaction based on prior experience is to answer “by doing nothing,” and while that’s always a possibility, this time could be different. The organization is being hit where it hurts the most: not on the court, not in the media, but in the wallet. I talked about this a little more last week, so make sure to check that out if you need an update, but the Bulls are suffering their worst attendance numbers in well over a decade.

While it wasn’t directly stated, that could play a role in why The Athletic – referencing their “spies” – hinted at a massive change if the losing continues:

One has to wonder if a more thorough housecleaning, one that would include both Boylen and front office staff, would be on the table, with our spies hinting that a more ambitious overhaul is possible.

Arguably more important than writing those “L’s” on the calendar are the lack of dollar signs replacing the Reinsdorf’s pupils.

Whatever the case may be, it sounds like the Bulls could be closer to a front-office makeover than ever before. My hopes aren’t high, but that’s the most positive news we’ve heard all season.

Until then though, buckle up. Things might get worse before they get better.