Zach LaVine May Want To Be A Superstar ... But It Takes A Lot More Than Want Skip to content 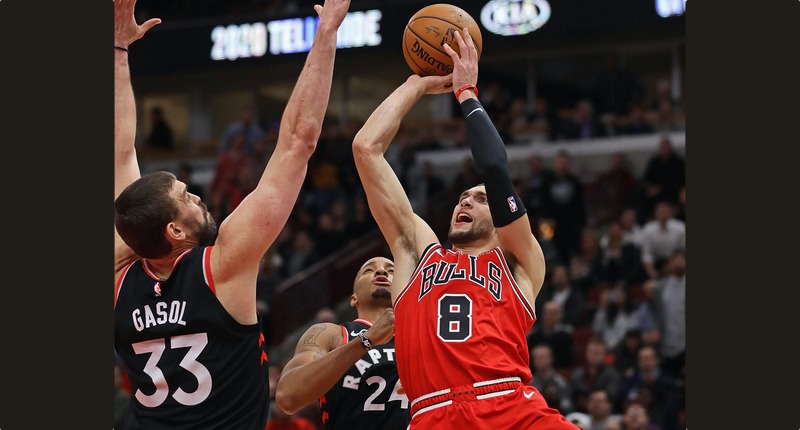 Last night, Zach LaVine put on his cape and tried to fly.

As the final seconds ticked off the clock with the Toronto Raptors up 93-92, the Bulls best scorer drove into the paint and went for the win. And then he hit a wall, missed the shot, and lost the game.

LaVine is not an NBA superhero – not yet, anyway – but he sure does try to play one on TV.

It’s hard to blame the guy. The Chicago Bulls are off to an 8-17 start and have him to thank for staying alive in the several games they did win this season. Indeed, he’s often the only hope. Yet while the Bulls view him as their winning player, it’s hard to say he’s lived up to that role. Even if he wants it more than anything.

“I don’t work my ass off to be a No. 2 guy or a No. 3 guy. I want to be a superstar,” LaVine said after the game (via The Athletic). “I want to be a top of the league type dude. And that’s what I see myself as. And I’m going to continue to strive for that and reach for my goals. That’s why I work so hard for it. I don’t sacrifice my entire summer and grind my life away to be just a regular guy in the NBA.”

Someone change my Facebook relationship status with Zach LaVine to “it’s complicated.”

On one end of the spectrum, I love hearing him talk this way. He’s honest about his intentions, and to his credit, he does appear to work his tail off to be in elite physical shape. A true star is confident, hard-working, and (normally) outspoken – LaVine demonstrates all of these traits.

On the other end, however, wanting to be a superstar and playing like a superstar are two incredibly different things (Michael: Hell, I wanna be a superstar). LaVine sounds like a five-star high school prospect with sights set on the league. Instead, he’s a six-year veteran who still hasn’t experienced a single winning season. But I digress. For LaVine to reach superstar status, he simply must execute in crunch time more consistently than he has this season (let alone for his career). Over just this last week alone, we’ve seen him choose the heroic play over the right play – and, obviously, it hasn’t exactly worked.

Against the Golden State Warriors, he waved off the Wendell Carter Jr. screen for a missed iso 3-point attempt. Last night, he chose to shoot over the double-team instead of opting for a better shot attempt from Daniel Gafford, Tomas Satoransky, or Denzel Valentine. A real NBA superstar doesn’t drain that basket, he finds the open man and grabs the winning assist.

Only one night prior, LaVine observed this exact superstar moment. Jimmy Butler drove to the hoop, got the double team, and passed out to a wide-open Tyler Herro for a game-tying bucket near the end of regulation.

And just for the sake of making a Michael Jordan reference (one should never pass up an opportunity), what did the GOAT do in Game 6 of the 1997 NBA Finals? He passed the ball to an open Stever Kerr on the biggest stage under the brightest lights.

Back to the present, look at LeBron James, who is averaging 10.8 assists per game this year, the most in his career by far because he knows Anthony Davis is the Lakers’ key to success. Heck, we can even throw Chris Paul pointing out an untucked jersey on Jordan Bell to draw a technical foul with 1.1 seconds remaining for game-tying free throws as an example. Frustrating, but smart.

It sounds silly, but winning players make winning plays. LaVine hasn’t been at the end of winning anything, which is why it’s hard to criticize him strongly for not knowing better. Plus, it doesn’t help that his head coach is in the same boat.

LaVine falling victim to the common misconception that superstar players always hit the game-winning shot. Sometimes, they do, just look at LaVine’s historic performance earlier this season against the Charlotte Hornets. When that shot isn’t there though, they find another way to get the job done, and that’s the part LaVine must learn if he wants to reach the superstar level he clearly desires.