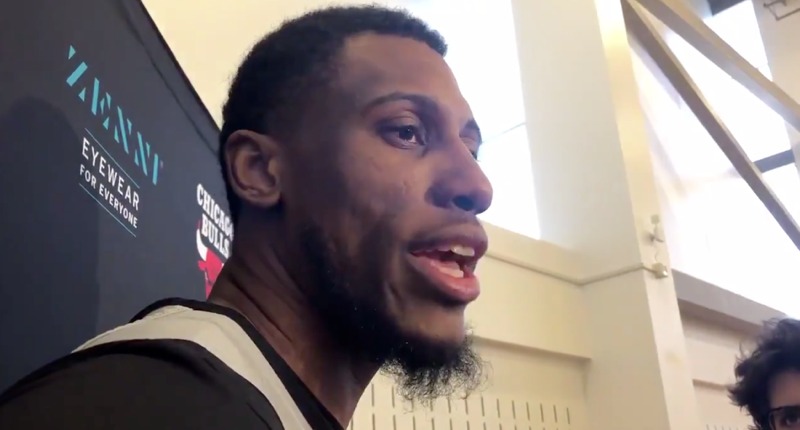 Media availability is a glorious thing.

One day after a Sun-Times report shared Thaddeus Young’s frustration with his playing time (and the possibility that he might seek a trade), the veteran forward spoke out. And – sporting nothing but smiles – Young answered questions in a way only a true professional could.

Check it out here:

Thad Young wanting more minutes but will continue to play hard with the minutes he gets. #Bulls #BullsNation #NBA #NBATwitter pic.twitter.com/9w5pACimzp

Can you tell he’s got 12 years of NBA experience under his belt?

Young immediately references his quote in the original Sun-Times article, which states he’s “good with whatever coach sees fit,” and proceeds to double-down on this notion: “No matter if I’m playing 20 minutes or 30 minutes, you guys have seen all year long, I’m just going to go out there and play as hard as I can to help my teammates. And that’s what it’s all about, me going out there for my teammates, staying calm, staying patient, waiting my time.”

The biggest takeaway from this interview isn’t about what Young does say, but rather what he doesn’t say. I think it’s important we didn’t hear a straight denial of the report. The message appears to be that Young wants more playing time, and he refers to that being something every player’s looking for.

“Everybody wants to play 30 to 40 minutes a game,” Young said. “Everybody wants to play, especially when they feel like they can help the team. But, like I said, at the end of the day, whatever coach sees fit to do, I’m falling in line and I’m rolling with it. I said that in all previous interviews. You can see that from all my quotes, they’ve been the same, nothing has changed.”

He might be rolling with it, but that doesn’t mean he’s happy about it.

We learn Young has told at least one reporter during the west coast road trip to “ask coach” when it comes to his lack of minutes on the floor. He brushes over the fact that he and Boylen have spoken about the matter to reiterate that whatever the head coach says, goes. While that might be true, he goes on to say, “I do feel like I could help the team a little bit more,” and that alone demonstrates a clear disconnect between him and Boylen.

If Young isn’t on Boylen’s side though, then who the heck is? The whole point of bringing in Young this offseason was to grab a more established presence on the court and in the locker room to help this youthful core grow. Instead, this is the second dose of player drama of the season (Zach LaVine and Boylen’s feud was first) and it’s coming from the team’s supposed “veteran leader.” That’s just another bad look for this organization.

In my opinion, I don’t think things will escalate far enough to a demanded trade on Young’s part (that just still feels too out-of-character). However, if Young can’t find any kind of reconciliation or common ground with this coaching staff, that could be a major problem for this team’s chemistry.