When the final buzzer sounds tonight in Boston, the Chicago Bulls will be halfway through the 2019-20 season.

For the front office, 14-26 isn’t exactly where they thought they’d be. For the fans, it may be disappointing, but it wasn’t unexpected. While some players have seen glimpses of progress, as a unit, the Bulls have shown little growth. And when that’s the case, it’s hard not to point fingers at the head coach.

NBC Sports Chicago’s K.C. Johnson decided to ask head coach Jim Boylen for an evaluation of his squad at the halfway mark, and while he touched on both sides of the ball … it wasn’t particularly convincing.

First, let’s take a look at what Boylen said about the defense:

I’m encouraged by the growth of our team. I like the fact we’ve established a style of play at both ends. I would like us to be more consistent. I’m disappointed in one part of our defense. I think we foul too much. I’d like us to improve at defending without fouling. I’d also like us to improve our defensive rebounding. Those are two huge pillars that would take our defense to the next level. We’ve missed Wendell in our defense. He’s a huge piece. But we gotta move forward on that. Those two guys backing him up have to continue to grow at the defensive end and help us.

Quirky delivery aside, Boylen does have a point here. The Bulls commit the 7th-highest number of personal fouls per game and they’re currently 26th in defensive rebounds per game. Those are two areas where the Bulls must improve to play better basketball.

But he has to understand that these problems are due – in no small part – to his overly aggressive defensive approach, especially when it comes to the fouling. The more scrappy he asks for this young team to be (like, say, on that overly aggressive blitz defense), the more likely they are to commit fouls. Sure, it’s an area ripe for improvement, but the defensive scheme – his defensive scheme – obviously plays a role.

And while fixing these two problems might help, it’s hard to say it’ll take this defense to the next level. Over the last seven games, the Bulls have held the 25th defensive rating in the NBA, dropping them to 9th-overall on the season (not long after being the 3rd ranked defense). As the schedule goes from one of the easiest to one of the toughest, Boylen’s defense is getting exposed, especially lately:

The Bulls defense is experiencing some big-time struggles, and it goes far past fixing the defensive rebounding and fouling.

Now, let’s read what Boylen said about his offense:

Offensively, there has been times where I like the way we have made basketball plays. We get backdoors. We’re reading and reacting. That’s what we’re trying to teach and coach here. We do have some inconsistent moments where we’re stagnant or we’re not organized or our communication is poor. If you have two or three of those in a game, you can maybe win. If you have five or six of them, it’s going to be more difficult. We had seven of those in the game Friday night and three against Detroit. That shows where we need to grow. I love how we work. I like the fact that we are building a system and foundation at both ends.

The No. 1 problem for the Chicago Bulls this season is on the offensive end of the court, and Boylen’s evaluation doesn’t give me much hope for improvement.

Unlike the defense, where he at least gave two specific areas of improvement, Boylen is basically saying the Bulls must simply … screw-up less? Like, uh, yeah: I know. The Bulls fall stagnant and disorganized way too often, but I’m much more interested in why that happens, because we can all see it plain as day.

So far, the Bulls have the 28th-ranked offensive rating in the NBA, and that means there’s some fundamental flaw with the way things are run (after all, there is some talent here). Indeed, we often wonder if Boylen is running the right system with these particular players, but if we’re relying strictly on the ranking, it’s a pretty easy “no.”

Boylen wraps up his comments by saying: “I like the fact that we are building a system and foundation at both ends,” which, just, whatever. I don’t know how many times we can comment on the extremely frustrating “foundation” remarks.

Boylen has a lot to sell – possibly for the sake of his own employment – but he’s not doing a particularly good job … on the court or in his comments. 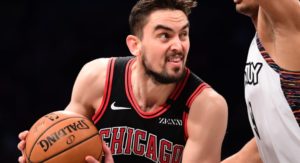 Sounds Like Lauri Markkanen is Open to an Extension – Should Bulls Reciprocate?