NEXT! Luke Kornet Gets a Crack at the Bulls Center Position Skip to content 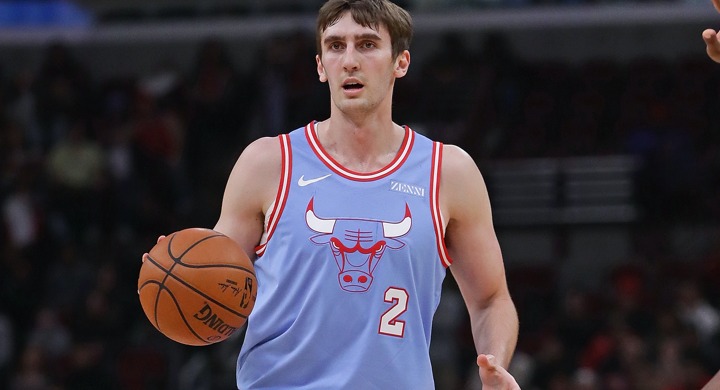 After Daniel Gafford exited the game early in the first quarter Wednesday night, it was up to Luke Kornet to man the center position for the Bulls. The seven-foot big man finished the game with a season-high 35 minutes on the court, scoring 10 points with 4 rebounds, 2 assists, and 1 block. Eh, not terrible.

Kornet has gone from out of the rotation to backup center to (most likely) starting center in the course of five games. With Wendell Carter Jr. and Gafford both sidelined for at least a couple weeks, Kornet will be the No. 1 option underneath the basket.

Due to the limited success he had at the beginning of the season, it’s hard to feel very optimistic about his potential production with the Bulls starting unit. While he can muster up the occasional block thanks to his massive size, he’s proven to be incredibly weak in this current defensive system. His real upside comes behind the 3-point line, where he’s been a surprisingly decent shooter throughout his career. However, the Bulls on both ends of the ball rely on a physical, rim-protecting presence, so Kornet will be forced to step out of his comfort zone quite a bit.

“We play the way we do, and I’m committed to playing that way, and we’ve been doing it all year, so it’s nothing new, really,” Kornet told NBC Sports Chicago.

If we know anything about head coach Jim Boylen, it’s that he doesn’t want to change his “system” (even when he probably should). But, again, Kornet will have to find a way to cut back on the 3-point attempts and, instead, battle down low, which is something Boylen seems to have already spoken to Kornet about.

Jim Boylen praised Luke Kornet and then added this: "He'll be spread and take his open 3s. I did tell him I don't ever want him to dribble out to the 3-point line to take a 3, like he has done a couple times. We got that clarified."

Admittedly, my hopes aren’t high for this Kornet fill-in, and I doubt I’m alone on that.

Yes, he’s put up two decent performances over the last three games with a 15 point outing against Detroit and last night’s 10 points performance against the Wizards, but he also played 21 minutes against the Celtics and scored a big fat 0. (Michael: And like we said when Gafford took over for Carter Jr., even if he plays exceedingly well, the Bulls depth takes a massive hit with every new, injured player).

The upcoming schedule will be a particular challenge for Kornet, thanks to matchups against the 76ers, Cavaliers, Bucks, and Timberwolves – as each team has a pretty elite starting big man (Horford, Thompson/Love, Giannis/Lopez, Karl-Anthony Towns). And my confidence in even a respectable performance against any of those players is … not high.

The alternative for Boylen though isn’t much better. Of course, he could opt to play small at times if Kornet proves to be a liability, throwing Lauri Markkanen at center and giving Thaddeus Young more opportunities (anything to avoid playing Cristiano Felicio).

But Markkanen has struggled underneath the basket throughout his entire career, so it’s hard to imagine he gives you a better chance than Kornet in any of these next four games. Young, on the other hand, has played well as of late and has been attacking the basket well. If the Bulls were smart, they’d try to get him in the pick-and-roll a lot more to get him going. The veteran forward has scored 17 and 18 points over his last two games, respectively. Who knows, maybe these big man injuries will force the Bulls to actually play Young like how he’s supposed to (and wants to) be played (I’m just looking for any silver-lining at this point).

Nevertheless, the Bulls are in one heck of a crappy situation. Relying on Kornet, Felicio or Markkanen to play significant minutes at center is worrisome. Relying on Boylen to make that decision game-to-game is ever more worrisome.