It's Not Just HOW You Use Lauri Markkanen, It's WHEN Skip to content 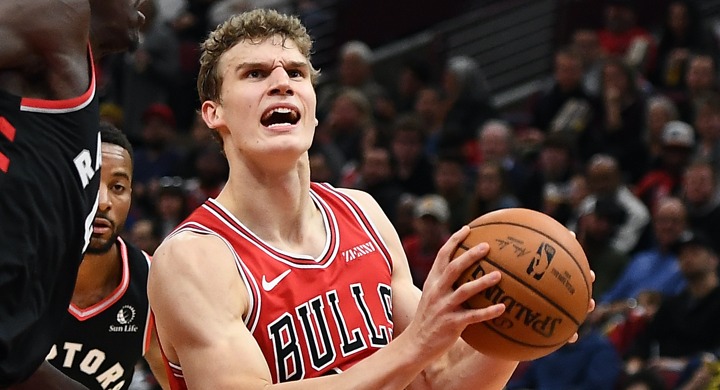 As the regular season rolls on, Jim Boylen’s stubbornness (with respect to his offensive scheme) continues to plague … well, the entire Bulls roster, but probably Lauri Markkanen the most. We discussed as much earlier this week.

In short, Boylen has successfully identified, but less successfully implemented some legitimate league trends this season, failing to tailor otherwise proven concepts to the actual skillsets of his players. However, Boylen’s categorical misuse of Markkanen, in particular, is not the only thing preventing that highly-anticipated step forward this season. It’s also the timing and flow of Markkanen’s game (vis-à-vis Boylen’s scheme).

Part of what Markkanen had to say after last night’s win over the Timberwolves got me thinking:

“If I get a couple looks early and I happen to make them, they got to end up guarding me differently. Then I’m going to have a drive to the basket, and I think I have a lot more options than just if I’m spotting up in the corner or anything like that. So I think it opens up the game a lot, not just for me. But I think the way they have to help on me, then it creates space for other guys too.”

As you would’ve rightly expected, a more-involved, more on-the-move Markkanen (particularly coming off ball screens) resulted in clearly improved production throughout the night (21 points, 6 rebounds, 42.9% from the field) compared to the rest of his season. But perhaps equally important – not only to Markkanen’s success, but the success of the Bulls writ large – is getting him involved this way early and often.

By doing so, as Markkanen points outs, an opposing defense is forced to guard him differently, which opens up his game and the options for Chicago. And, hey, if that naturally creates more opportunities for him to spot up for some corner threes, then GREAT. That can (and should) be a happy byproduct of a more tailored offensive approach, not the singular goal of the scheme to begin with.

And this is a fairly tested hypothesis, at least with respect to Markkanen.

In February of last season, Markkanen played like the most confident player on the court, averaging 26 points and 12.1 rebounds per game. And while I know Bulls fans too often point to this month in support of Markkanen, there are questions to ask and lessons to learn from that dominance. For example … was he scoring earlier than normal that month? And if so, does that support his self-assessed keys to success?

To find out, I took a look at Markkanen’s first and second quarter stats during that (very productive) stretch from last season and compared the data against this (less productive) overall 2019-2020 campaign. Take a look ….

Now, OF COURSE, there are going to be some abnormalities when you’re comparing a small, one-month batch of data to a much larger season-to-date sample – to say nothing of underlying numbers just generally looking better when we already know the production was high during that period – but I still think there’s something here.

Last February, Markkanen averaged 6.1 attempts and 5.8 points in the first quarter, compared to just 3.6 attempts and 4.0 points this season. That’s a significant drop. And the trend holds true in the second quarter and first-half, in general (just look above for specifics). In other words, one of the most successful stretches of his career was defined by more early attempts and more early points. And by contrast, this more disappointing season is defined by the opposite.

Obviously, that’s not an exhaustive dive into the data and there could be a bit of results-bias baked into that, but it’s an interesting start, right? Especially given how it lines up with his own comments after last night’s game.

To put a bow on it for now: If Markkanen is not only used better (i.e. taking advantage of his size, mobility, and versatility (not only his outside shooting prowess)), but also used early and often, the combined effects of that gameplan could leave us with something closer to the production we saw last night or last February than anything else we’ve seen this season.

If it sounds elementary, that’s because it is. The multiplier effect on a player’s production is simple but real. And in Markkanen’s case, it could be as easy as (Get him on the move) x (Use him early). The way the opposing defenses go about guarding him thereafter can open up opportunities for the rest of his game, even those spot-up, corner three’s over which Jim Boylen obsesses.

And, hey, if it’s exactly what he’s asking for, maybe we should listen.

(Eli: I’m putting Michael on blast, because he totally hijacked this post from me. If you hate it, well, it’s his fault. If you love it, well, it was my idea!)