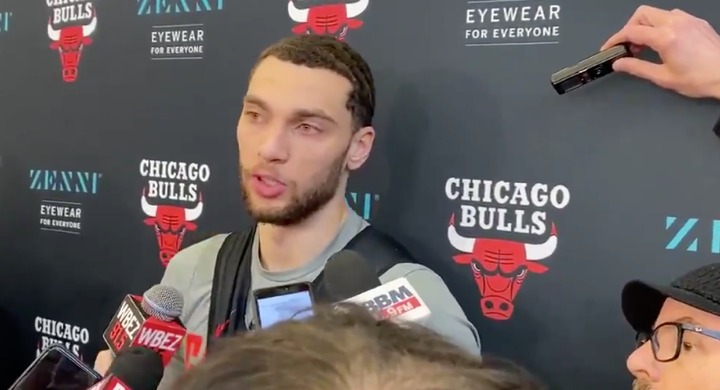 The NBA schedule may have continued as normal last night, but there was nothing normal about the circumstances.

In the wake of the tragic loss of NBA superstar Kobe Bryant and his daughter Gianna, each NBA team paid their respect in one way or another. ICYMI: We shared some of the moments earlier today in our morning bullets, so check it out. I also shared some of my more personal thoughts right here.

The Chicago Bulls will take on the San Antonio Spurs later tonight at the United Center, and the team spoke with the media this afternoon for the first time since the news broke. Thaddeus Young and Zach LaVine both said the team plans to honor Bryant in some way, with Young, specifically, stating it’s likely the team will start the game with a 24-second violation.

Young also mentioned he’s been wearing Bryant’s shoes all season, and tonight will wear a special pair in honor of the league’s fallen star.

. @yungsmoove21 has been wearing Kobes all season. These are the ones he has on today to honor him. Said how devastating this news was. pic.twitter.com/ev0nQWeRFE

Meanwhile, Zach LaVine has been playing his whole career with Bryant in mind. He told reporters Monday that Bryant is one of the reasons he wears No. 8 across his chest. His favorite player growing up, LaVine seemed to connect even more with the “Mamba Mentality” than the game itself.

“He inspired a whole generation of kids pretty much,” LaVine told reporters. “They wanted to be like him. Like kids in the ’80s and ’90s wanted to be like Mike, we wanted to be like Kobe. Growing up and seeing the different highlights, his hard work, I feel like that’s one of the biggest things that was instilled in me, his hard work. I try to bring that to my game. And his passion for the game, how ruthless he was as a competitor.”

LaVine reminisced, sharing two stories about his time on the court with Bryant. He mentioned a time Bryant gave him a tap on the butt and told him to “keep going” during one of his first big games in the NBA. LaVine also happened to be the one to foul Bryant in Minneapolis to set up the free throws needed to surpass Bulls legend Michael Jordan on the all-time scoring list.

As game-time nears tonight, not only will the team decide the best way to pay their respects, but LaVine also said he will have a better idea of how he plans to keep Bryant’s memory alive.

You can find the full interviews with Thaddeus Young and Zach LaVine here.