Chicago Shows Out for D-Rose at His Book Signing, Showers Him With MVP Chants Skip to content 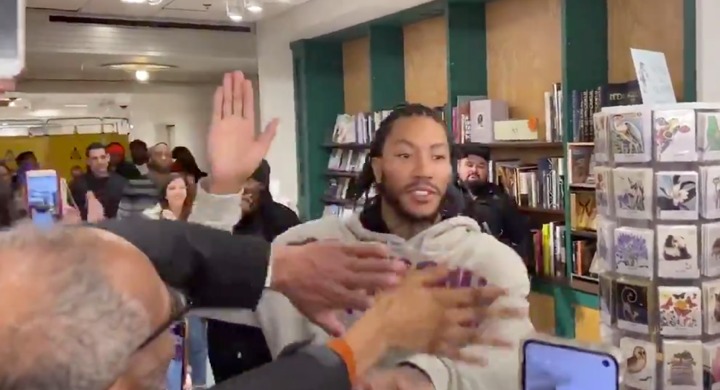 From the United Center to Barbaras’s Bookstore, no matter where Derrick Rose goes, he’ll always be an MVP.

“Kind of surreal, especially in this environment,” Rose told NBC Sports Chicago. “In a bookstore, this is something I never thought about, especially coming from where I come from.”

On State Street, Rose was met with an incredibly long line of fans who were waiting patiently to get their copy of I’ll Show You, Rose’s new book, signed. He was showered with cheers and MVP chants as he walked into the room. A fitting welcome home to a Chicago icon.

And here’s his reception. ‘MVP’ chants ring through the hallowed halls of Barabara’s Bookstore pic.twitter.com/1SbzSCUk1T

Rose hasn’t played in Chicago since the 2015-16 season, but you wouldn’t guess that based on the reaction he gets every time he steps foot in the Windy City. Thursday morning’s event seemed like an even bigger deal knowing that Rose would not be participating in the Skill Challenge on Saturday as initially thought.

An appearance on All-Star Weekend at the United Center would certainly be a sight to see, especially in the wake of his bounce-back campaign with the Detroit Pistons, where he is averaging 18.2 points (shooting 49 percent from the field) and 5.8 assists per game.

Oh, he can also do this again …

#Pistons Derrick Rose on the pregame dunk: "I've got fresh legs…I'm surprised you saw that."

D-ROSE FOR THE DUNK CONTEST!

All-Star festivities or not, it looks like the fans that came out to support Rose on Thursday made it a break to remember for the Bulls legend.

Chicago will always love you, Rose.