Umm ... Is Zach LaVine Getting Ready to Surprise Everyone in the Dunk Contest? | Bleacher Nation Skip to content 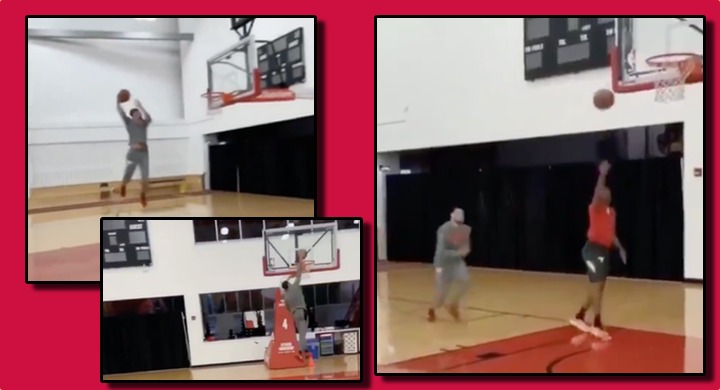 Did that man really almost just throw down a 360 from the free-throw line!? Are you kidding me!?

Twitter user JoshJBullsHoops randomly released three videos of Zach LaVine attempting (and landing) some ridiculous dunk on the Bulls practice court. We’re not quite sure where these videos first surfaced or if JoshJBullsHoops filmed them himself, but it certainly appears as though LaVine was trying these dunks out recently.

If you look closely, the 3-point shootout racks the Bulls ordered for LaVine to practice on are spread out across the court, so it’s safe to assume this was a very recent clip. And while it’s also quite possible this was nothing more than an impromptu dunk contest, why practice such insane dunks so close to All-Star Saturday Night? Could LaVine be gearing up for a surprise appearance on his home court!? I HAVE QUESTIONS AND I NEED ANSWERS!

When LaVine accepted the 3-point shootout invitation, and the dunk contest roster was set with Aaron Gordon, Derrick Jones Jr., Dwight Howard, and Pat Connaughton, any hopes for a LaVine comeback appearance went down the drain. However, All-Star Weekend is all about entertainment, so it’s hard to rule out the NBA pulling on a fast one on us. Besides, he said he was willing to do all three event if he made the All-Star Game. I know the whole thing sounds kind of crazy, but … PLEASE PLEASE PLEASE BE TRUE!

And another one from Zach: "If I had made it, I would’ve wanted to put on a big-time show for the crowd. I would’ve tried to do all three of them, the All-Star game, dunk contest and 3-point contest. It didn’t happen."

Anyway, here are LaVine’s other dunks posted online, which feature an off the backboard reverse slam and a one-handed between the legs move.

Crazy to think the greatest dunker in the league tore his ACL two years ago and came back with a HIGHER VERT pic.twitter.com/YfBSszeLZY

Yeesh, this man can fly!

Rapper J. Cole Might Try Out for the Detroit Pistons, Because Why Not?