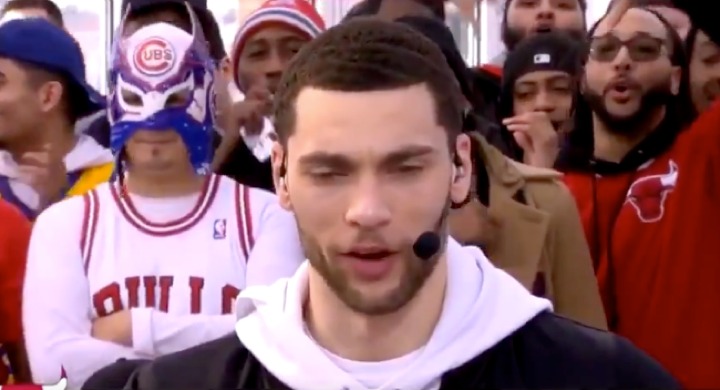 Welcome to Chicago, NBA fans, where our pizza is deep, our weather is freezing, and our basketball is broken.

ESPN’s First Take has been broadcasting live from Navy Pier over the last two days with a live audience full of the Chicago-faithful. On Thursday morning, Zach LaVine joined the program to talk about the current state of the team and the upcoming 3-point shootout.

While I’m sure the Bulls star expected some harsh questioning on the team’s lackluster record, I’m not sure he expected to hear a massive “Fire GarPax” chant breakout.

“FIRE GARPAX” chants have broken out on national television. pic.twitter.com/PqkIP41ogZ

On one of the nation’s biggest sports talk shows, Chicago fans made sure to deliver the message they’ve been trying to get across for years. An All-Star Weekend in Chicago with practically no Bulls representation already acted as a harsh reminder of how far this franchise has fallen. But fans chanting for the two leaders of the organization to be canned has instantaneously jumped the Bulls situation to a whole new level.

The NBA is starting to learn just how unhappy the city of Chicago is with its once-historic franchise.

Ultimately, the only person I feel bad for in this situation is LaVine. As much as the poor guy might want to chime in (I mean, come on, it kind of looks like he doesn’t mind it), he just has to sit there and take it all in. I respect the heck out of him for responding quickly and professionally to the atmosphere. Obviously, the guy isn’t going to bad-mouth the front office writing his checks, so he simply reminded those at home that while the fans “might speak differently” he is here for his team.

Overall, you have to hope this will have some lasting impact. With the weekend just beginning, chances are this will be the talk of the town for at least the next couple of days. At one point or another, it might make sense for John Paxson and Co. to address this national outcry. And if the Reinsdorfs didn’t already feel enough pressure with the substantial dip in attendance and overall city-wide angst, this should certainly make them think long and hard about what this offseason will bring.

I know we’ve all learned to never get our hopes up with this organization, but this weekend could very well be the straw on Jerry’s back.

Front office seats are hotter than ever before, so keep bringing the heat, Chicago!