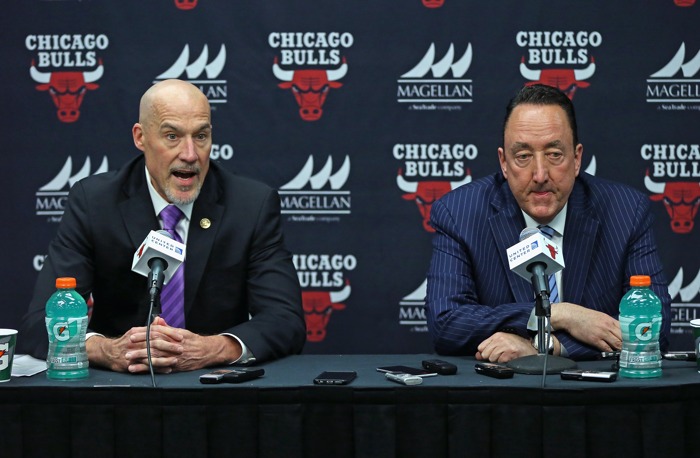 According to a report from the Sun-Times, the Chicago Bulls have used this All-Star Weekend to start their search for a new front office addition. As we’ve heard throughout this season, the organization remains focused on finding someone to step into General Manager Gar Forman’s role (though with likely a little more say)

Here’s what the Sun-Times had to say:

According to several NBA executives, the Bulls have started the early stages of adding a new face to the front office, with the position defined as a general manager “with a louder voice.’’ One executive did say that the talks the Bulls have had with candidates have been through back channels, with no formal interviews taking place, but the search is believed to be wide-spread.

I was hoping the Reinsdorfs would have the forethought to use this weekend to their advantage.

With the NBA’s best and the brightest in town, it’s certainly a rare opportunity to gauge interest in an open position. However, the only problem with this news is that John Paxson is reportedly involved in the hunt. Joe Cowley of the Sun-Times wrote he and COO Michael Reinsdorf were “lurking” and both “engaged in the initial legwork of much-needed changes coming to their organization.”

While the expectation through all these rumors has been job-security for Paxson, the hope remained that he may be taking enough of a backseat to not be involved in the front office turnover. While reports do say whomever the new hire is would take over the media spotlight and day-to-day operations, allowing Paxson to take a backseat upstairs, league executives apparently indicate that Paxson will not be given another title and lesser role.

The search for the new Bulls front office position is wide-spread, rather than in-house. John Paxson will not be stripped of any power, but will take a more behind-the-scenes role like Ken Williams has done with the White Sox. They will also be adding to the scouting department.

(Michael: I agree with Eli in general. but I can add that this did ultimately work out for the White Sox, who are a franchise renewed after a very similar transition).

Cowley writes “other league executives” have been the ones relaying this information, and they might very well be in the I’ll believe it when I see it state of mind (like a lot of us). If Paxson is involved in these preliminary discussions though, that doesn’t bode well for this idea of shifting him entirely out of basketball operations.

Meanwhile, this report also reaffirms the idea of Forman not losing *a* job either. The plan still appears to be moving him into the scouting department, which … eh.

To take one positive away from this though, apparently, the plan is to greatly expand the scouting department this spring. So while Forman might still have his say, hopefully, enough fresh minds can be in the mix to shake things up. I’m looking for anything to be optimistic about here, folks.

The one other encouraging sign? The Bulls could be ready to move on from Jim Boylen:

What will be interesting is what happens to coach Jim Boylen? The current Bulls front office and ownership have backed Boylen fully, but all indications are that the new hire will be given the chance to stick with Boylen or bring in a coach that they hand pick.

I mean, it’s hard to imagine a sensible General Manager being cool with a late-timeout calling, poorly-respected head coach at the helm of his new team. With that being said, if Paxson is still given a say in the hiring process, albeit one behind-the-scenes, who’s to say he doesn’t hire someone who is cool with Boylen as head coach? Keeping a close eye on this decision, in particular, could tell us a lot about the new GM’s autonomy, as K.C. Johnson recently put it.

Bulls president Michael Reinsdorf used this week to continue seeking input from confidantes around the league on candidates for “an empowered presence” in the front office, according to @KCJHoop, citing sources:https://t.co/EwlfiJXhQ3

At the end of the day, that’s the most concerning thing about this whole report. The Bulls appear willing to get some fresh faces in the front office, but we’re still getting no clear indication that the full purge we all want is in effect.

UPDATE: Apparently, this process didn’t just “start” this weekend, but clearly the talk has amped up …

To be clear, this process has been ongoing and started before this weekend. But talk has been rampant throughout All-Star weekend about expected upcoming changes. https://t.co/LFyM4WzsA6