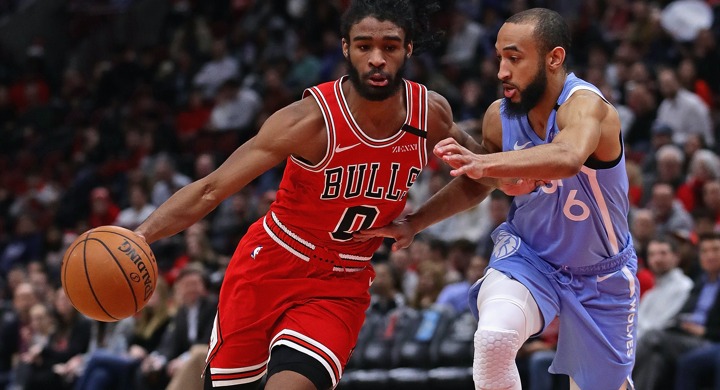 A couple of short months away from finishing his first season in the NBA, White is the epitome of a modern rookie. He spent one year with a blue-chip program before entering the league as a promising and developmental lottery pick. His transition into the league has been rocky at best, but he’s offered enough explosive and memorable performances to keep Bulls fans hopeful for the future.

What sets White apart from his NBA rookie class though is his impressive professionalism and self-awareness.

Sam Smith (Bulls.com) recently spoke with White about his adjustment into the NBA lifestyle and his post-All-Star expectations, and it’s a post you’ll definitely want to check out (tons of interesting, revealing quotes in there). In the article, White chimes in on a question many have asked since even before he was drafted on June 20th, 2019: Is Coby White a point guard?

For Bulls fans, the verdict is still out.

For White, not so much.

“The goal for me is to be a point guard in the NBA,” White told Bulls.com. “Early in the season, I didn’t have the ball in my hands as much to be the predominant ballhandler. But now the coaching staff has been trusting me with that. So I’ve tried to be a point guard, facilitate more, try to put my teammates in position to score and try to create. But still taking my shots when they are there and attacking the rim. I’m starting thinking about being a point guard out there, especially with guys out.”

Since the Draft Combine, White fully intended on running point at the NBA level. While adapting to this role has proven difficult, he’s shown some clear signs of progress recently. Over the team’s last five games, White has averaged 11.4 points, 5.0 assists, and 4.2 rebounds. The points per game may not be all that exciting, but his assists and rebounds sure do look a lot better than the 2.4 assists and 3.5 rebounds he is averaging for the season. And, for what it’s worth, the eye test has worked in his favor recently as well.

I mean look at this dime …

White is finally displaying some level of balance between his natural scoring and learned facilitating. However, this has meant the high-scoring performances we saw at the beginning of the season from White have slowed down. While I think everyone wants White to focus on adding the true-point guard duties to his repertoire, it’s also important to allow him to do what he does best (and for us not to freak out when he struggles to does those things).

The guy will always be a scorer, but that doesn’t mean he can’t help run the show. He commented on that concept himself, mentioning a few high-volume scorers who have carved out a point guard role for themselves in this league.

“I think that’s the way the position is trending if you look at Lillard, at Russ (Westbrook), all those guys,” White told Smith. “I think that fits my mode better than the traditional point guard role because of my natural scoring ability. Also, I want to be a guy who trusts his teammates and can make the right play and get them involved.”

White has got himself a point. He has a long way to go to reach that status of a player, but plenty of the league’s top point guards have a stronger knack for scoring the basketball than anything else. As long as White can learn how to make the right play at the right time and encourage ball movement, he could easily become a formidable point guard.