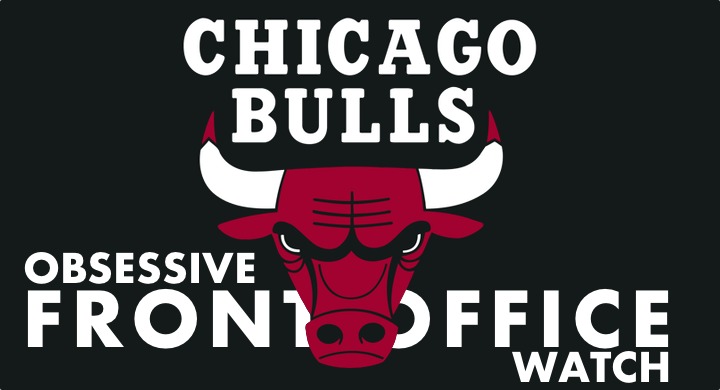 The No. 1 thing you didn’t want to hear today: “The Reinsdorfs still have 100 percent faith in John Paxson.”

In the wake of the countless reports regarding the Bulls effort to change the front office after this season, Paxson’s job security has never seriously come into question. In fact, from the start of these front office rumors up through today, the one constant is the idea of Paxson maintaining some role of significance within the organization. While the verdict is still out on exactly how active he would be with the day-to-day basketball operations moving forward, the Sun-Times reported again today that the Bulls are confident in Paxson’s abilities.

However, the Sun-Times also revealed that the Bulls aren’t expected to make only one big hire this offseason:

A source familiar with the situation told the Sun-Times on Wednesday, that there could be multiple people hired, however, as the power structure is still being determined.

I think it’s fair to say that this has been implied through the many reports we’ve gotten over the past couple of weeks, but it’s still good to hear it out loud. Indeed, while a lot of the recent talk has been about finding a new general manager, rumors about how “everything is on the table” have circled for weeks. At this point, several fresh faces should be the expectation.

The fact of the matter though, is that even if the Bulls hire plenty of new names in the scouting department, GM’s office, or elsewhere, nothing changes unless a loud voice is put at the helm. Finding a new general manager or vice president of basketball operations is key to getting this team back on track, and according to David Kaplan, the Bulls could be targeting just that type.

On Wednesday morning during the Kap & Co. show on ESPN 1000, Kaplan said he’s been told that money will “absolutely, 100 percent” not be a problem. The Bulls are apparently ready to drop the big bucks on someone who is an already-proven front office executive. Then, in a conversation with an apparently well-connected source, Kaplan started throwing around names like Steve Kerr, Masai Ujiri, and Daryl Morey. While none of the three appeared to get a definitive no from this source, one separate name stood above all else.

Here’s what Kaplan said his source told him:

“He goes, I will give you a name I think absolutely is in play and would be an amazing hire – Sam Presti, General Manager, Oklahoma City Thunder. He said that guy wants to play on a bigger stage.”

AHOOGA! *eyes pop out of skull and jaw drops to the floor*

Kaplan’s source said Presti has done all he can in Oklahoma City, and if he’s on the Bulls list, it’s very possible he’s working in Chicago as soon as next season. There is only so much weight we can throw into such reports right now, especially considering no one has actually been reassigned or fired within the organization. But Presti has become one of the most impressive front office minds in the entire NBA.

Presti not only has an impressive draft resume, but his most recent accomplishments include trading away Russell Westbrook and Paul George for an attractive pile of talent and draft assets (oh, and still manage to have a playoff-caliber team this season). He’s managed to pull off impressive free-agent signings and turn a smaller-market Oklahoma City Thunder team into a consistently competitive threat. Good stuff.

If what Kaplan is saying is true, and Presti is willing to leave Oklahoma City, I’d write the check and hand him the franchise this second. Even better, Kaplan said the word is Presti’s relationship is strong enough with ownership that if he wanted to walk away, the team would let him do so with no return compensation from the Bulls (Presti is still under contract in OKC).

To be clear, I don’t think any of this is a direct link between Chicago and Presti. Instead, it’s simply a report that provides one high-profile name that is rumored to be “okay” with leaving his franchise. We have no idea if the Bulls are considering him nor do we know if Presti is truly interested. Nevertheless, this starts an interesting conversation about how big the Reinsdorfs can shoot when looking for their next franchise savior.

At the end of the day, the only news that continues to gain serious traction is that this Bulls team will finally make some changes. I’ll believe it when I see it, but the more national attention it gets, the closer it feels to becoming a reality.

Well this is some national attention … https://t.co/Qa4DBFrEe5