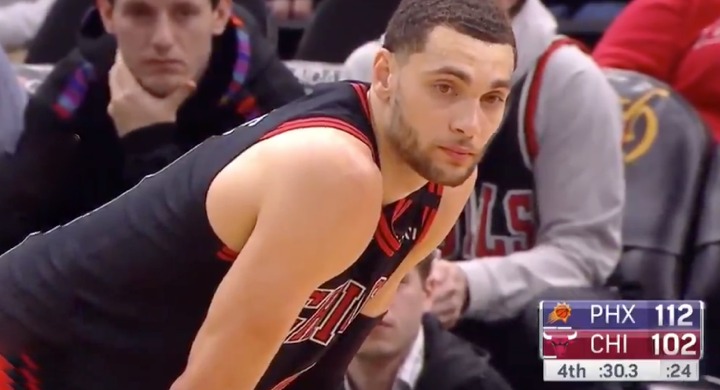 Some people bite their nails, some people eat too much junk food, and some people call late-game timeouts with their team down double-figures at the end of a losing season with most of their key players injured and ultimately unavailable.

No matter the habit – they’re all bad.

Chicago Bulls head coach Jim Boylen has been dealing with the latter throughout the course of this season. And as the weeks fly by, the late-game timeouts have only ramped up … right along some visible frustration from his players.

Last night against the Phoenix Suns, for example, the Bulls blew a 17-point lead with relative ease, as the third quarter – once again – proved to be catastrophic (the Bulls were outscored 36-23). Chicago managed to keep things close in the 4th, but with about 3 minutes to go, their 8th-straight loss was clear on the horizon. However, down 10 with just 30 seconds remaining, Boylen couldn’t help himself. The whistle blew, and he gathered the troops for some quality, developmental time together.

Zach LaVine, who’s been no stranger to showing and voicing his frustration with his head coach, walked back onto the court angrily bewildered.

Just got home saw a tweet about Zach Being annoyed again about a Boylen timeout. After the timeout Zach shakes his head and seems to say "why call a timeout down F'ing 10" pic.twitter.com/lV4HH356Wb

Normally, if the cameras picked something like this up, you can almost guarantee the media is going to ask about it after the game. However, according to NBC Sports Chicago’s K.C. Johnson, Boylen got to LaVine before the media could. The coach pulled his player aside in the locker room to apparently address the situation – the same situation he blew off again when asked about during his postgame press conference.

“It’s what he do, man. It’s what he do,” LaVine told reporters. “I don’t know what else to tell you. He told me he likes working on things that we do in practice and things like that so. He’s the head coach. He can call timeouts if he wants to.”

LaVine continued, referencing the team’s inability to close out games, a sickness that’s plagued this team all season long.

“I just wish we were in the game,” LaVine said. “We played a really good game throughout the whole game, and then we lose control. It’s just frustrating when you know at the end. Obviously, you never know what can happen type thing, but you’re down by 10 with 20 seconds left. It’s tough to stay locked in at the end of that.”

If it’s frustrating for you sitting on the couch, think about how frustrating it is for these players.

Ultimately, the late-game timeouts aren’t at the core of what makes Boylen the wrong coach, but it’s the icing on the cake of incompetence (Michael: And it certainly shows a little lack of awareness, both of himself and the effect those breaks have on his players, right?). The more embarrassed his team becomes on the court, the further the disconnect grows behind closed doors. I already believe there is no coming back for Boylen in his locker room, but there is always a way to make things worse.

After all, when the team’s uber-professional veteran leader – Thaddeus Young – declines to comment on the matter (via The Athletic), I think it’s safe to say, in the eyes of most players, Boylen’s life as the Bulls head coach has flat-lined.

Is that the case upstairs? Who the heck knows.