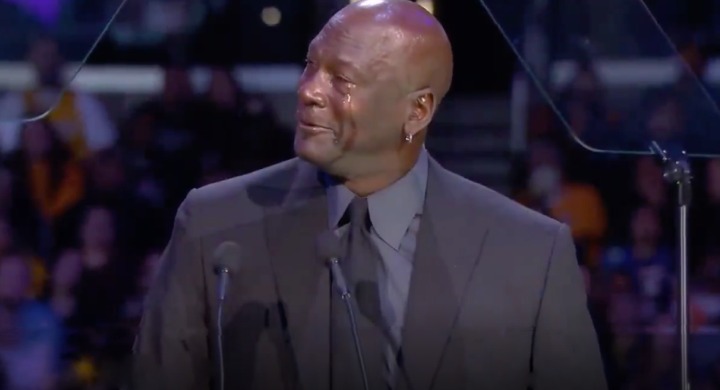 On Monday afternoon, the Staples Center celebrated the life of Kobe Bryant.

With an incredible amount of family, friends, fans, and NBA legends in attendance, the ceremony was filled with heartfelt moments from start to finish. And one of the best moments came thanks to the man Bryant was compared to the most throughout his entire 20-year career – Michael Jordan.

And that’s exactly what he did.

Jordan filled his speech with beautiful memories and inspired words, as we all learned of Bryant’s ability to make even the GOAT strive to be better.

Even in the midst of discussing sheer tragedy, Jordan found a way to give everyone a touching moment of laughter. Unable to control his tears, Jordan referenced his infamous crying Jordan meme, saying before the speech he hoped to avoid giving the internet an updated version (check out that moment here).

Michael Jordan giving everyone a heartfelt laugh during his speech about his fellow legend and little brother.

I think on behalf of everyone I can say, don’t worry Jordan, your tears are safe (and shared) with all of us.

Considering he has limited his public exposure over the years, even staying surprisingly quiet during the recent All-Star Weekend in Chicago, Jordan’s entire speech came as a pleasant surprise. However, make no mistake, while the spotlight may have been on him for those 10 minutes, the focus was entirely on the late Kobe Bryant.

Thank you to the GOAT for mourning with all of us, and thank you to Kobe Bryant for always bringing the NBA world together.

Check out Jordan’s full speech below:

“As I got to know him, I wanted to be the best big brother that I could be.”