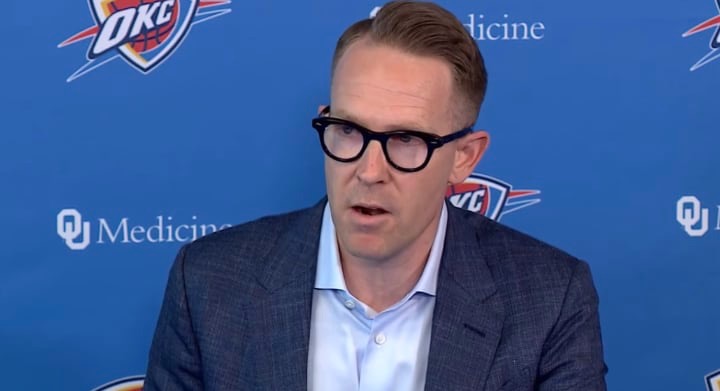 “Sam Presti is [the Bulls] number one target, that’s the guy they want. Can they get him out of a 10-year contract without having to pay an exorbitant amount of compensation remains to be seen ….

I’ve been assured that if Sam Presti can get out of his deal and the Bulls can get him they would be prepared to pay him whatever it took, and that’s probably five years at $50 million. So we’ll see, they’ve never done that before, they’ve never paid like that before, but from what I’m hearing, money will be no object if they can get the right guy.”

Kaplan has brought up the Oklahoma City Thunder President, Presti, before as a potential Bulls target, but it initially failed to come off as anything more than a pipe dream (at least, in my opinion). However, this time around, Kaplan is hammering this home as a legitimate candidate of interest for the Chicago Bulls, and that has my full attention.

But let’s have a little talk: Ripping away a front office face – let alone one as renowned as Presti – is never an easy feat. And the fact he sits with a comfortable long-term contract in the Thunder organization is what makes entertaining this possibility feel like hugging a porcupine … I want to embrace the idea, but I know it could sting.

Plus, it’s not like his organization is in a bad place strategically (now or in the future) – Presti has potentially positioned the Thunder to have 15 first-round draft picks over the next seven seasons. And while they’re currently in the midst of a rebuild, the Thunder (37-23) has a hold on the 6th spot in the Western Conference playoff picture.

But Kaplan does seem to think that, under the right circumstances, Presti could be lured away (and allowed to leave):

Reportedly, people I talk to in the league said his deal with his owner, who he’s very close to is, ‘look you’ve been a great employee that’s why I pay you what I pay you and I gave you a long-term deal, I want you here. But if you tell me you want to play in New York, Chicago, one of the two LA’s, the biggest stage in the world in the NBA, I would let you out of your deal.’ There are others in the league who think that only applies to the New York Knicks job because he had harbored this fantasy of going to New York at some point in his career, and that’s not going to happen now that they hired Leon Rose away from CAA to run the Knicks operations as their President.

But even as all public signs point to Presti holding a tremendous relationship with Thunder ownership, I’m still hesitant to believe they would be so quick to let him walk, especially without any compensation. A bridge to cross another time, I suppose.

Perhaps the most encouraging part of Kaplan’s report is the fact that the Bulls appear willing to spend the big bucks to get him. With a top-three market in the NBA to pitch and a wide-open pocketbook, Chicago’s chances of landing a big-name front office face feel pretty darn good. Now, whether that face is Presti’s will surely be something to follow. But again, that willingness to go big for this job transcends this one pursuit.

And hopefully, if the Bulls are willing to spend that kind of money, they’ll also be willing to step aside and let that new hire run the show. The primary concern remains that while the Reinsdorfs will make some changes after the season, they’ll still allow the old habits (GarPax) to stick around. At the end of the day, a name like Presti isn’t leaving his current job to answer to anyone other than himself. I mean, Kaplan said as much: Presti isn’t going anywhere without “total control.”

The other loose thread here that requires our attention is the difference between someone being your number one target and someone being a realistically obtainable target, especially when that someone isn’t even a “free agent,” so to speak. After all, I’m sure a majority of the teams around the league would like to get their hands on Presti, but whether that’s really plausible remains to be seen.

You’ll forgive me for being guarded on a rumor this sexy for a decision this important. No matter how badly the Bulls may want to go after Presit, we don’t actually know if they (1) will or (2) can get it done. Some things are simply out of their control. But obviously if this story continues to gain momentum, it’s something to be excited about.