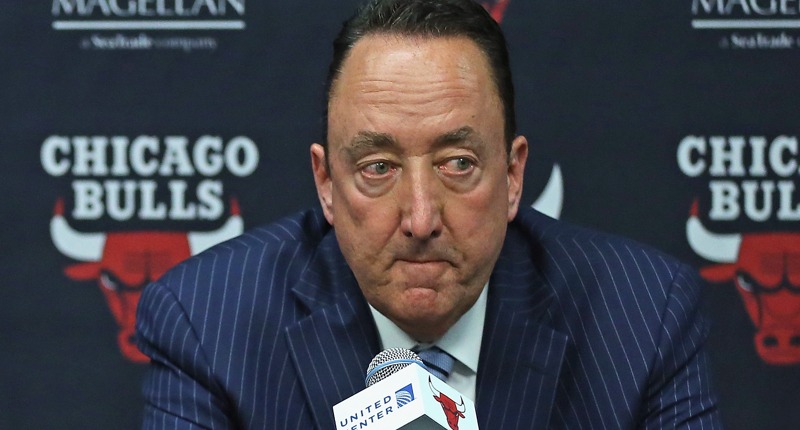 Chicago Bulls fans are about to get half of their wish granted. Probably.

According to the Sun-Times, Gar Forman’s days with the Bulls organization are numbered. The longtime general manager will supposedly be relieved of his duties during the organization’s massive front office overhaul this offseason.

Here’s what reporter Joe Cowley had to say:

The Sun-Times initially reported that even with the front office restructure coming, Forman could be kept on as a lead scout or thrown a new title, but that even seems to no longer be in play.

The days of Forman and his cohorts lurking throughout the organization are all but done.

His title is months, maybe weeks, away from officially being stripped.

The idea that Forman would be shifted to the scouting department over the summer gained a lot of traction during the last couple of months. But if Cowley’s word is true, Forman’s relationship with the organization has weakened to the point of extinction throughout the course of this season.

The latest report on his job security also came via the Sun-Times, when on March 13th, they reported Forman was practically hanging on to the last thread of Jerry Reinsdorf’s suit. The Bulls owner, for years, has apparently been the only person of consequence to want Forman in the building, but even he became skeptical of the work he was doing recently.

Cowley says that the empty seats at the United Center mixed with the disapproval of Forman by former players while in town for Luol Deng’s retirement was the final straw on the camel’s back. The empty seats may have paid off!

Overall, I highly recommend you give the full Sun-Times piece a read because it lays out well how Forman’s reputation has completely plummeted.

The question now, however, is how much do the Bulls think this will fix things? Firing Forman is what fans have wanted for the past several seasons, but if they think that one decision will fill the seats again, they’re wrong. Fans want to see a complete overhaul, and while it still sounds like Paxson might be involved to some extent, we’re all too smart to allow this organization to use Forman as a scapegoat.

Cowley wrote this front office restructuring “is expected to be the biggest overhaul in franchise history,” which I guess is good to hear. However, with many of the same faces at the helm of this franchise for the past two decades, it’s hard to estimate what this ownership group considers “big.”

If they’re smart, they’ll hand the keys to a new general manager AND vice president of basketball operations. While in the meantime, revamp their scouting and player development department. I wholeheartedly believe the latter of these two things will be done, but I’m still incredibly skeptical that the right choice will be made with the two most important positions in the organization. Obviously, if Forman’s out, the Bulls will be in the market for a new GM, but the Bulls (and we’ve stressed this time and time again) will have to give this person complete autonomy. I can’t picture anyway this happens if John Paxson remains in his current role as vice president of basketball operation. If the team is actually looking to make the biggest overhaul in franchise history, they would hire someone new to each one of these positions. These are all important things to think about over this long hiatus!

Anyway, the wishy-washy reporting on Forman’s tenure with the team may finally be over. For now, at least we can move forward knowing that his future with the team is likely done. Half the battle appears to be won, but the other half is much harder.