Throwback Game 3: WELCOME TO THE SPACE JAM! Skip to content 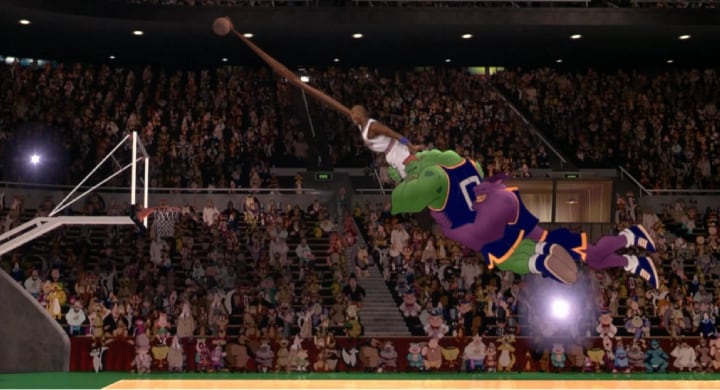 Previously: BANG! IT’S OVER! THE BULLS WIN AT THE BUZZER!
Today: SPACE JAME!

Tune Squad vs. Monstars – The Most Insane Basketball Game Ever Played (November 17, 1995)

The bench includes … psssh, just kidding. These guys are 12 feet tall and can literally crush a full-size human being (which they do to Stan Podolak during the game) easier than I can crush an ant.

A thread of entire matchup starts here on Youtube:

The only moment that truly matters:

I’m pretty sure absolutely everything that happened on this basketball court would be a foul in a real NBA game, but I digress. Michael Jordan was peak Michael Jordan during this game. And remember, this was supposed to be during his baseball stint, so he wasn’t even in basketball shape! I guess he did work out with the Tune Squad fam to prepare for the big game, but, sorry, I digress again.

SO there were several baller moments throughout this high-stakes matchup, and since the No. 1 is so obvious, let’s go through some honorable mentions first.

For starters, Jordan’s first basket of the game was an absolute masterpiece. He literally did a double spin past three Monstars and then went straight-up for the two-handed slam. He then proceeded to yell at Porky Pig to get back on defense, which I mean, just shows the heart of a true champion. I would’ve been celebrating the crap out of dunking on three intergalactic cartoon characters, but Jordan went right back to business because he is the GOAT.

Another great moment that deserves recognition is Jordan tricking his naive team into thinking water was his secret stuff. While I don’t normally condone lying, this was necessary. If Jordan doesn’t do this, his team likely doesn’t have the willpower to compete in the second half. I mean, at halftime the score was literally “kinda one-sided ain’t it” to “18.”

Lastly, I’ve got to give a shoutout to Wile E. Coyote. The man covered the entire basket with dynamite at some point in the second half and had it explode right when Bupkus was going for a crazy, momentum-shifting dunk. Part of me is like, where the heck was this the whole game? Is that all the dynamite you had? Could you not have spaced it out throughout the game and used it for a broader defensive strategy? Either way, I respect the move.

Now, the real moment of the game is OF COURSE when Jordan stretches his body in mid-air across one half of a basketball court. He channels his inner-cartoon, and despite being grasped by the Monstars, drops the ball in for the game-winning bucket. incredible. I’ll leave it at that, it speaks for itself.

Not only a legendary cinematic moment, but this might have been the best basketball game ever played. And on that night at Tune Stadium, Jordan had easily his greatest achievement ever.

Sure, he can flaunt his six rings all he wants, but nothing will ever beat the historic performance he had as a member of the Tune Squad. Jordan rallied a group of rag-tag cartoon nobodies to upset some of the biggest, badest ballers in the universe. Not to mention, he basically saved the future of the NBA by returning the talent to some of its star players.

For anyone who tries to say Jordan isn’t the GOAT, you try to dominate at the level he did in two different realities. Impossible.

Now sing it with me …

Everybody get up, it’s time to slam now
We got a real jam goin’ down
Welcome to the Space Jam