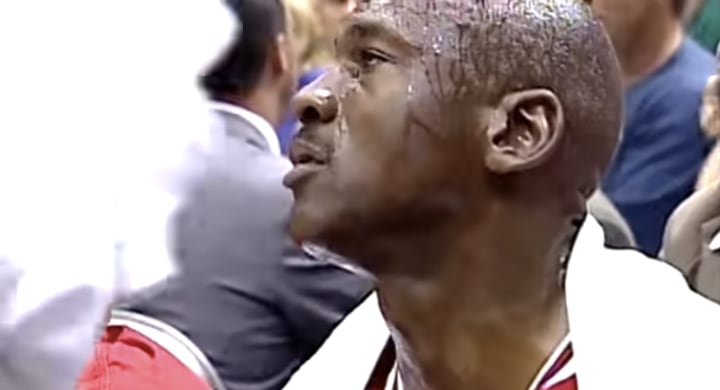 Previously: WELCOME TO THE SPACE JAM!

Toni Kukoc went 3-4 from downtown off the bench during this game … not bad.

I know this stat doesn’t really matter in this scenario, but I was quite surprised to see John Stockton finished this game with a -19, which was by far the worst on the team.

Michael Jordan walked on the court visibly weak. By the second quarter, the Jazz gained a 16-point lead as Jordan found the bottom of the net only twice. Either the Jazz were on the brink of taking a 3-2 series lead, or the league was about to see one of the most spectacular performances ever on a basketball court (sounds like an exaggeration … but it’s not). Considering we were dealing with Michael Jordan, I think everyone soon realized it would be the latter.

Jordan played like a beaten-down truck. When he got that extra boost and the clock was running, he could play. When the whistled sounded and he headed to the bench, it looked like you wouldn’t be able to get him started again. However, the funny thing about that kind of truck (at least in movies … and this might as well have been one), it always seems to come through when it’s needed most.

And when the 4th quarter started, Jordan took control.

He scored 15 of the team’s 23 points, which included – of course – a ridiculously clutch final minute. With 46 seconds to go, Jordan got to the line and tied the game by making one of two free throws. Then, thanks to a Toni Kukoc deflection, Jordan grabbed the offensive rebound and the Bulls began to run down the clock. With 25 seconds remaining, a tired Jordan standing behind the arc received a pass from a double-teamed Scottie Pippen (how could you leave Jordan even a little open!?). The GOAT immediately drained the 3-pointer and backward-hobbled up the court. The man was drained. The Jazz were screwed.

Nevertheless, the true “moment” of the game wasn’t a Jordan bucket, not even close. Instead, it was when the GOAT looked human and other-wordly all at the same time. With only a few seconds left in the game and a stoppage of time, Jordan fell into teammate Scottie Pippen’s arms as the two walked toward the bench. The snapshot is one of the most iconic photos in sports history.

In Jordan’s eyes, he probably looked the most vulnerable he ever had on a basketball court. In everyone else’s eyes, he looked like superman.

When you can say three words and most people know the game you’re talking about, it means that game was a pretty big deal.

The Flu Game is a performance known by sports and non-sports fans alike. Overall, it’s an easy choice to make almost any list of best NBA games of all-time. A riveting performance from start to finish, the natural theatrics were unlike anything basketball had seen to that point in time. For that reason, the game has left a lasting legacy, and to this day it’s surrounded by conspiracy.

Did Jordan have the flu or was it food poisoning? Did someone purposely give him a bad pizza (his personal trainer seems to think so)? Did Jordan even feel that sick or was he feeding into the narrative? Wait, did he just have a bad hangover?

The mystery surrounding the game makes it all the more interesting. Whether it be the game itself or the narrative around it, everything about this screams GOAT status.