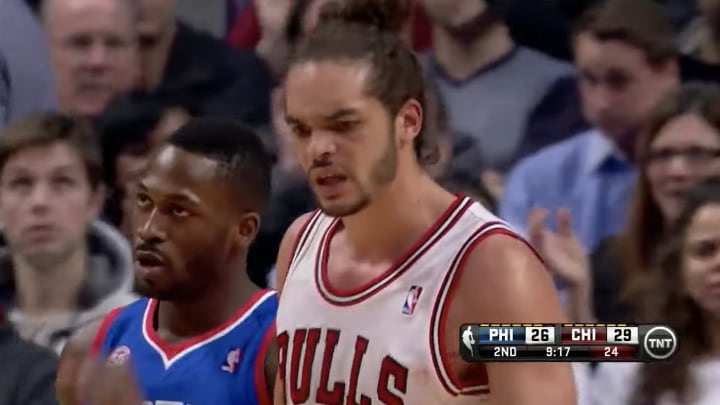 Is it just me or are you also having a hard time comprehending that this lineup existed?

Joakim Noah had his fair share of big games during his nine years in Chicago, but nothing quite like what he did on February 28th, 2013. In front of a packed United Center crowd and on a nationally televised stage, Noah showed everyone exactly why he was a first-time All-Star.

The big man had his third career triple-double, but he did it in a way that cemented him in the record books. Only seven other players in NBA history came close to what Noah did that night, when he recorded 23 points, grabbed 21 rebounds, and blocked 11 shots. Yup, that’s a prestigious 20-20-10 performance, something that nobody in the league has done since, per Basketball-Reference. And when you’re on the same list as players like Kareem Abdul-Jabbar, Shaquille O’Neal, Hakeem Olajuwon, Shawn Bradley, and Elvin Hayes, you know you’re kind of a big deal.

Noah made the 76ers frontcourt of Thaddeus Young and Spencer Hawes look absolutely silly, and he single-handedly carried the Bulls to a 93-82 victory (yikes, that score).

Oh yeah – the moment of the game. I would probably have to say when he finished an and-one with 4:48 to go in the 4th quarter. He put the Bulls up by double-figures and it felt like the exclamation point on a ridiculously dominant night. He let out a trademark Noah scream as he headed to the line, and while his bucket wasn’t the flashiest or smoothest (they rarely were), it felt like you were watching a truly dominant player.

And if that moment is not good enough for you, how about when he recorded his 11th block to tie the franchise single-game record for blocks in a game (Artis Gilmore also had 11)?

I think it’s pretty easy to see why this performance sits right at the top of Noah’s career resume, but the context makes the outing all the better. With Derrick Rose sidelined for – what would become – the entirety of the season, Noah stepped up to a whole new level. He helped lead the Bulls to a 45-37 record and the 5th spot in the Eastern Conference playoffs. He was a first-time All-Star and the first Bulls center to make the big game since Artis Gilmore during the 1980-81 season. This performance jump-started a stretch where he had double-digit rebounds in eight of the next nine games (and six of those games were double-doubles).

In a worrisome season without Derrick Rose, Bulls fans love for Noah only grew as he left everything on the court night in and night out. He was proving to be one of the best centers in the league, as he continued to build his Chicago legacy.

While this single game isn’t always the most memorable, it helps show exactly the kind of player Noah was and why he’ll always have a place in the Bulls history books.