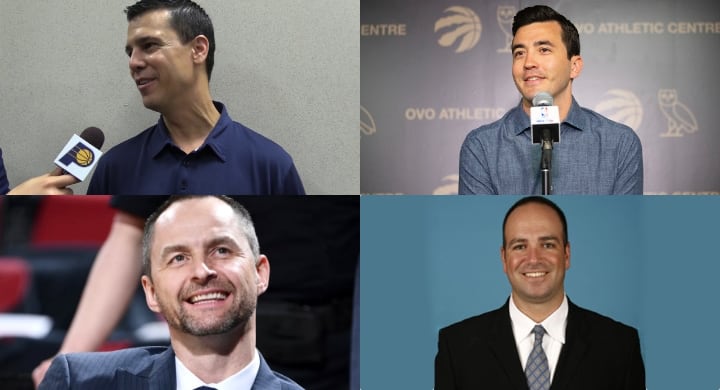 On Friday afternoon, Chicago Bulls fans got some big-time news.

ESPN’s Adrian Wojnarowski made official what a number of local reports had been alluding to for months – the Bulls are making some massive front office changes. Gar Forman and John Paxson will reportedly no longer be at the helm of this organization, so pop a bottle of champagne (or two) and toast your quarantined-self!

After the news broke, a list of potential candidates immediately hit the interwebs, with ESPN, The Athletic, and NBC Sports Chicago all sharing the names that are currently on Michael Reinsdorf’s list. According to Wojnarowski’s initial report, virtual interviews will be conducted starting next week, and the plan is to have a new face of the franchise by the time the league resumes play.

A new top basketball executive in place if/when the season resumes gives him a chance to evaluate the roster and coaching staff before the off-season starts. https://t.co/8VCcR9ByI1

More information on the legitimacy of each candidate is bound to pour out over the next several days and weeks, but for now, let’s at least get an instant rundown of the names reportedly on the table.

A former euro player turned NBA executive, Karnisovas has been at the helm of an extremely successful rebuild in Denver. He joined the organization as an assistant GM in 2013 before eventually being handed some big boy pants in 2017. While with the team, he’s basically done exactly what the Bulls have failed to do, rebuild successfully.

The Nuggets have seen pretty substantial growth over the past several seasons, with the team finishing 2nd in the Western Conference last season. According to the Denver Post, Karnisovas has been instrumental in the teams drafting of Nikola Jokic, Jamal Murray, and Michael Porter Jr.

Before his time with the Nuggets, he worked in the league office from 2003-2008, and then with the Houston Rockets as an international scout until making the move to Denver. I like the experience.

Young and exciting: those are two simple, yet proper words to describe the Toronto Raptors’ Bobby Webster.

One of the youngest current GM’s in the NBA (36), Webster has proven to be an absolute freaking success – to be blunt. He started working in the NBA at only 22-years-old and slowly moved his way up the ranks. In 2013, he joined the Toronto Raptors organization, handpicked as one of the president of basketball operations Masai Ujiri’s first hires.

As one of the most well-respected front office executives in the NBA, a Ujiri stamp of approval holds quite a bit of weight. Of course, Webster’s resume holds up on its own though. At such a young age he was able to give the smaller-market Raptors organization its first NBA Championship in franchise history. And he was an instrumental part of the team’s trade for Kawhi Leonard.

He has basically lived a full NBA life in a little over a decade. Helping construct the 2011 Collective Bargaining Agreement and his time working as the Associate Director of Salary Cap Management has surely given him an elite understanding of the league’s inner-workings. If you don’t love almost everything about Webster already, go ahead and read The Athletic’s awesome piece about him.

“He’s going to head a team, at some point,” Ujiri told reporter Dan Robson. “Hopefully he doesn’t overthrow me.”

This guy knows what’s up.

Simon has been with the Heat organization for 25 years, learning and helping establish a winning culture along the way.

A behind-the-scenes face for years, Simon hasn’t experienced the same movement around NBA circles as the other candidates, but he’s held plenty of important positions within the Heat organization. A quick look at his numerous job titles, and it’s easy to assume he has a great understanding of what it takes to run a franchise.

I’d have to say one of his greatest strengths appears to be scouting and player development. While helping run the Heat for years, he also was in charge of the team’s G-League affiliate who has helped mature several key players for today’s current Heat team, including Derrick Jones Jr., Duncan Robinson, and Rodney McGruder.

If the Bulls could use anyone, it would be someone who understands the scouting and player development side of things. With such a young group of talent, the interest here from the Reinsdorfs makes a lot of sense.

Chad Buchanan was the first reported name that the Bulls had an interest in earlier this season. For more on him, and how he stacks up against these other candidates, check out these previous posts:

But here’s a taste:

The main commonality we’ve already seen from Buchanan is the massive respect he’s received from his players. While he may work more behind the scenes in the Pacers organization, make no mistake, he seems to be quite the people person. In Alex Kennedy’s piece on the inner-workings of the Indiana franchise, All-Star Victor Oladipo had quite the high-remarks about the GM that traded for him during his very first day on the job:

“I haven’t played on many teams, but based on the teams I have played on, it’s pretty rare for upper-management to take the players’ input and opinions to heart and really try to apply those things throughout the entire program. For them to do that, it just shows what kind of people they are and it shows what kind of organization we’re trying to build.”

So far, the Bulls have done a good job of collecting qualities candidates. Now let’s see if they can land this plane gracefully.